Tony Curtis’ best role has to be the sleazy publicist Sidney Falco in Alexander Mackendrick’s acid noir Sweet Smell of Success (1957).   Burt Lancaster’s manipulative NY celebrity columnist enlists  the amoral Falco to destroy his younger sister’s suitor. These guys are as bracing as vinegar and cold as ice: ambition stripped of all pretense.   The chemistry between Lancaster as the sinister chat columnist  and Tony Curtis as the ruthless publicist is palpable.  It is also DP James Wong Howe’s sharpest picture –  the streets of Manhattan have never looked so real.

I was fed-up I guess

In the still-topical and very off-beat noir, The Glass Wall (1953), about post-war refugees and the nature of true compassion, Gloria Grahame gives a richly delicate performance as a young woman on the skids who helps a desperate asylum-seeker played with obvious sincerity by Vittorio Gassman.  The streets of New York are rendered with a stunning chiaroscuro palette by DP Joseph Biroc. While the direction by Maxwell Shane could have been tighter, he also had a hand in the excellent script.  A gem worth seeking out.

The Big Clock opens with the dark silhouette of skyscrapers against a New York night with bordello jazz on the soundtrack. After a pan tensely edging right across the screen, the camera rests on and zooms into the mezzanine level of a modernistic office building with the signage ‘Janoth Publications’. An anxious man in a suit narrowly avoids a security guard as he sneaks into the mechanism of a large clock that dominates the foyer below. His voice-over relates the circumstances of a dire predicament and events flashback to the previous morning.

But this is about as noir as it gets. The guy inside the clock is a suave Ray Milland, a family guy working for a dictatorial publishing tycoon as the editor of Crimeways magazine. His boss is a gargoyle in a suite sporting a Hitler moustache, and with the nervous habit of sliding his flabby forefinger across his bushy upper lip. A man who knows the cost of everything and the value of nothing. Charles Laughton occupies the suit and the executive suite in a building of apt fascist modernist lines fashioned by the film’s art director, Hans Drier.

Director John Farrow and DP John Seitz infiltrate this place with smooth and flowing steps that despite their elegance somehow render the whole space rather flat. Office space is sterile at best, and the result is a ponderous unraveling of a story that borders on the tedious. But such spaces can be rendered with atmosphere. Look at how – and this is indeed ironic – the same Dreier and Seitz under the direction of Billy Wilder make an insurance office look interesting in Double Indemnity (1944).

To cut to the chase, Milland is being framed for a murder by murderer Laughton, who doesn’t know the true identity of the guy he is trying to frame. It sounds better than it plays out. The whole scenario is played too lightly and with no atmosphere. The source novel by Kenneth Fearing has lost something in Jonathan Latimer’s screenplay. Though the tycoon’s final misstep as he escapes into his personal elevator is savagely noir.

Thankfully the affair is saved by an uproarious turn from a supporting actress in a part that occupies less than seven minutes of screen time. British-born character actor Elsa Lanchester – Laughton’s wife and Mrs Frakenstein in the camp classic Bride of Frankenstein (1935) – is a zany bohemian painter, who by chance gets tangentially mixed-up with Milland and proceeds to steal the picture – there is a pun here you will recognise if you have seen the movie or watch the clip below. She keeps turning up and closes the movie with a neat scene of comic irony.

This is her story. She first appears in an antique shop where she and a drunken Milland in the company of the tycoon’s girlfriend haggle over a rather grotesque painting.

In this early Jean Renoir film with a magically delicious femme-noir and a brilliant car chase at night, were sewn the seeds of French poetic realism that flourished later in the 30s in the films of Marcel Carné and others.

La Nuit du Carrefour is a largely faithful adaption of Georges Simenon’s gloomy pulp policier ‘Maigret at the Crossroads’.  Renoir in a television introduction to the movie in the early 60s said the screenplay is deliberately episodic and the rough-edges exaggerate the obscurity of the story to create an atmosphere of mystery.  A review of the film in Time Out says the rough edges come from Renoir running out of cash before completion, while a story put about by Godard says that some footage is missing.  It is a moot point though as the picture is great as is.

The cinematography of Georges Asselin and Marcel Lucien is dark and brooding, with foggy rural night scenes infiltrating even interior shots.  An exhilarating car-chase at night filmed from the pursuing car in real-time uses only the car headlights, and is an exemplar of the creative fusion of director, camera, and editor.  The editor is Renoir’s wife, Marguerite.

In the film, a city detective investigates a murder in a small rural burg, with suspicion surrounding the strange foreign tenants of a mysterious house: a bizarre ménage comprising a stoned b-girl and her reclusive ‘brother’, who as a foreigner with a weak alibi is the immediate suspect.  The girl Else, played to delicious perfection by Danish actress, Winna Winifried, steals the picture. Renoir has aptly described Else as a ‘bizarre gamin’. You want Else to be in every scene – she is stunning and her turn is so lascivious. While in the book Else has more depth and is certainly less screwy, I think I prefer her screwy and sexy! Particularly memorable is the ambivalence of the relationship between Else and the detective, played by Renoir’s brother, Pierre, which is woven into the mis-en-scene with erotic abandon and casual elegance.  My poetic homage to Else is here.

The story plays as a classic who-done-it, but by the end the veneer of the bucolic ville is stripped away to reveal a rotten reality where almost all residents, both workers and bourgeois, are complicit in a drug-trafficking racket, that segued into murder over the loot from a jewel heist.  The irony is that the early suspect, Else’s brother, is innocent, while Else has been trapped by her past into a forced complicity that will see her released from jail early.

If you like your noir dark, sexy, mysterious and sharply witty, go for it! 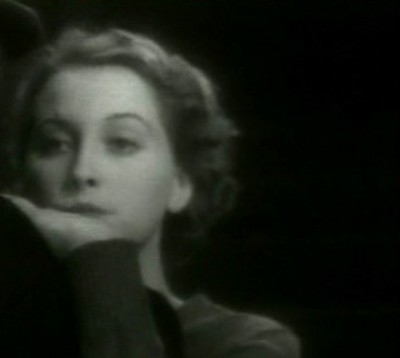 She leaves you a broken wreck
panting for more

You beg for
just a glimpse 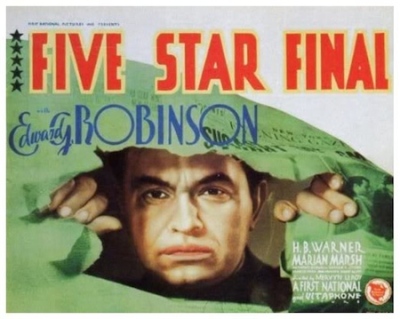 The great Edward G. Robinson is the hard-boiled editor of a big-city tabloid. The owner of the paper comes up with the idea of boosting circulation by pursuing a lurid expose on the fate of a woman convicted of a crime of passion 10 years earlier, with tragic consequences.  Directed by the distinguished Mervyn LeRoy, Five Star Final is an early Warner ‘social protest’ movie, and the sort of movie that epitomises the pre-Code talkies: sharp dialog, sexual innuendo, irreverent satire, and social criticism.  While the picture is marred by the stagy treatment of the melodrama involving the family destroyed by the tragedy that ensues, the immensity of the tragedy and its putrid genesis sustain a powerful and still relevant narrative.  Boris Karloff is a hoot as an amoral ‘undercover’ reporter: Edward G. calls him “the most blasphemous thing I’ve ever seen”.

But is it a film noir? I think there are sufficient noir elements to sustain a strong case: the theme of the corrupt brutality of ‘business’, individual entrapment, the futility of trying to escape a dark past, and a downbeat ending.

The final three minutes are brilliant and can be savoured from this clip: