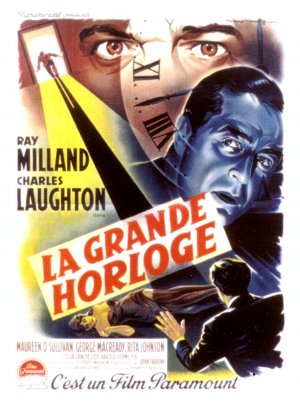 The Big Clock opens with the dark silhouette of skyscrapers against a New York night with bordello jazz on the soundtrack. After a pan tensely edging right across the screen, the camera rests on and zooms into the mezzanine level of a modernistic office building with the signage ‘Janoth Publications’. An anxious man in a suit narrowly avoids a security guard as he sneaks into the mechanism of a large clock that dominates the foyer below. His voice-over relates the circumstances of a dire predicament and events flashback to the previous morning.

But this is about as noir as it gets. The guy inside the clock is a suave Ray Milland, a family guy working for a dictatorial publishing tycoon as the editor of Crimeways magazine. His boss is a gargoyle in a suite sporting a Hitler moustache, and with the nervous habit of sliding his flabby forefinger across his bushy upper lip. A man who knows the cost of everything and the value of nothing. Charles Laughton occupies the suit and the executive suite in a building of apt fascist modernist lines fashioned by the film’s art director, Hans Drier.

Director John Farrow and DP John Seitz infiltrate this place with smooth and flowing steps that despite their elegance somehow render the whole space rather flat. Office space is sterile at best, and the result is a ponderous unraveling of a story that borders on the tedious. But such spaces can be rendered with atmosphere. Look at how – and this is indeed ironic – the same Dreier and Seitz under the direction of Billy Wilder make an insurance office look interesting in Double Indemnity (1944).

To cut to the chase, Milland is being framed for a murder by murderer Laughton, who doesn’t know the true identity of the guy he is trying to frame. It sounds better than it plays out. The whole scenario is played too lightly and with no atmosphere. The source novel by Kenneth Fearing has lost something in Jonathan Latimer’s screenplay. Though the tycoon’s final misstep as he escapes into his personal elevator is savagely noir.

Thankfully the affair is saved by an uproarious turn from a supporting actress in a part that occupies less than seven minutes of screen time. British-born character actor Elsa Lanchester – Laughton’s wife and Mrs Frakenstein in the camp classic Bride of Frankenstein (1935) – is a zany bohemian painter, who by chance gets tangentially mixed-up with Milland and proceeds to steal the picture – there is a pun here you will recognise if you have seen the movie or watch the clip below. She keeps turning up and closes the movie with a neat scene of comic irony.

This is her story. She first appears in an antique shop where she and a drunken Milland in the company of the tycoon’s girlfriend haggle over a rather grotesque painting.