A reader has asked which American films noir have been inducted into the US Library of Congress National Film Registry.

I did a little digging and identified 26 Hollywood movies in the list that fall under the film noir umbrella.  There are 650 films in the list so the standard e&oe disclaimer applies.

These are the runners-up to my listing of the best (5-star) films noirs. The combined list appears here as Essential Films Noir. The ‘almosts’ are 147 noir movies I rate as 4 or 4.5 stars…

These are the runners-up to my listing of the best (5-star) films noirs.  The combined list appears here as Essential Films Noir.

The ‘almosts’ are 147 noir movies I rate as 4 or 4.5 stars.   As with the all-time best noirs list, the films are listed by year of production and are not ranked.

The greatest films noir of all time. Ambitious and perhaps presumptuous. But without apology or regrets. A list of 65 movies which I rate 5-stars…

The greatest films noir of all time. Ambitious and perhaps presumptuous. But without apology or regrets.

A  list of 65  movies which I rate 5-star – the top films noir.  As  have an aversion to rankings, my list of the best films noir is listed by year of production.

With the valuable assistance of Fanglei from China, who provided the names of screenwriters, I have revised my earlier post of noir novelists to produce a new post which includes screenwriters.  Again, I welcome revisions.

The listing has been transferred to a permanent page: Film Noir Writers Listing

Widen your cinematic experience and consider these neo-noir releases:

These on-line essays are well-written and serious studies of the film noir genre:

No Place for a Woman: The Family in Film Noir by John Blaser

The Outer Limits of Film Noir by John Blaser

Nietzsche and the Meaning of Noir by Mark Conard

An Introduction to Neo-Noir by Lee Horsley

The Urban Landscape of Marxist Noir by Alan Wald

Film Noir: Fear In The City by Bruce Hodsdon

Film Noir and the German-Hollywood Connection by Hyde Flippo

Shades Among Shadows: The Murder Mystery, Film Noir, and Poetry by David Lehman

Lost in the Dark: The Elusive Film Noir by Patrick Ellis

The Cinematic Flaneur:
Manifestations of modernity in the female protagonist of 1940s film noir
by Dr Petra Désirée Nolan

Film Noir: You sure you don’t see what you hear? by Raffaele Caputo

Another list of recommended books on Film Noir History & Theory from an Amazon.com customer with comments:

by Alain Silver
Buy new: $25.55 / Used from: $14.35
The essential reference book for film noir of the classic period. Includes some discussion of neo-noir. Plot summaries, names, dates, and critical analysis for nearly 300 films.

The Dark Side of the Screen: Film Noir by Foster Hirsch

Buy new: $19.77 / Used from: $10.32
Another introductory text. Published in 1981, this was one of the first books on film noir written in English. Older and less comprehensive than the Spicer book, but still a solid introduction.

Buy new: $16.47 / Used from: $11.94
Engaging survey of classic film noir written for a popular audience. Not intended to be comprehensive, but an winning introduction to great films for casual fans and noir buffs.

Buy new: $11.53 / Used from: $6.95
Noir film theory’s seminal work, first published in France in 1955, on which all subsequent theory was built. Amazingly insightful, considering it lacked the benefit of hindsight.

More than Night: Film Noir in Its Contexts by James Naremore

Detours and Lost Highways: A Map of Neo-Noir by Foster Hirsch

Buy new: $20.00 / Used from: $5.94
Follows neo-noir 1960-1999, as the style became a Hollywood mainstay. Analysis of old ideas and new trends, from the surprisingly retro to audaciously original films. Best book on neo-noir.

Shades of Noir: A Reader (Haymarket)

Buy new: $19.77 / Used from: $18.98
Not film theory, but it should be. These tabloid photographs from 1920s-1950s will disabuse you of the widely held belief that film noir’s vice, violence, and realism were products of the WWII era.

Somewhere in the Night by Nicholas Christopher

Buy used from: $2.31
Personal treatise focusing on elements of post-WWII urban environment which the author believes shaped film noir style. Interesting, thoughtful, but a stretch in terms of theory.

Out of the Past: Adventures in Film Noir by Barry Gifford

L. A. Noir: Nine Dark Visions of the City of Angels by William Hare

Buy new: $39.95 / Used from: $25.00
Analysis of 7 classic noir films and 2 neo-noir films that take place in Los Angeles. Includes discussion of related films and the directors, actors, and writers involved in their creation.

L.A. Noir: The City as Character by Alain Silver

Buy new: $14.96 / Used from: $12.75
Classic and neo-noir in Los Angeles, with emphasis on how the city and its landmarks help create the noir mood. More than 150 b&w photos including many location photos indexed with addresses.

Art of Noir: The Posters And Graphics From The Classic Era Of Film Noir

by Eddie Muller
Buy new: $34.65 / Used from: $25.00
A wonderful showcase of the brash, lurid poster art of classic film noir. 338 posters and lobby cards are reproduced in eye-popping color. Captions and essays expound on the bold styles.

Painting With Light by John Alton

Buy new: $19.77 / Used from: $11.99
Not film theory, but lighting theory. A handbook to cinematography written in 1949 by John Alton, low key lighting specialist and one of film noir’s most recognizable and revered cinematographers.

Its A Bitter Little World: The Smartest Toughest Nastiest Quotes From Film Noir

Buy used from: $1.88
Book of quotes from film noir and crime films 1932-1964. Organized by film, indexed by artist and first line. Includes reproductions of more than 60 movie stills and lobby cards.

I came across this interesting Film Noir Recommended Reading List by an Amazon.Com customer and his comments:

by Alain Silver
Buy new: $25.55 / Used from: $14.35
Another excellent “List” book. Not much in the way of photos, but this is probably the most comprehensive list of film noir out there.

Death on the Cheap: The Lost B Movies of Film Noir by Arthur Lyons

Buy new: $17.50 / Used from: $9.00
The ultimate reference of all B-film noir. The book is entertaining and really digs deep trying to find some forgotten gems (and more than a few stinkers).

The Noir Style by Alain Silver

Art of Noir: The Posters And Graphics From The Classic Era Of Film Noir

by Eddie Muller
Buy new: $34.65 / Used from: $25.00
This one goes great with Noir Style. A collection of colorful film noir movie posters in coffee-table-book size.

Painting With Light by John Alton

Anthony Hopkins in an interview with Cinema Blend about his new film, Slipstream, which he not only wrote and directed, but in which he also stars and wrote the music, says of his influences:

Our existence is beyond our explanation… I believe that everything is illusory, because we can’t grasp anything… The films that I really like were the film noir movies […] Those film noir things just got to me as a kid. A film that’s non-linear, Burt Lancaster in The Killers… 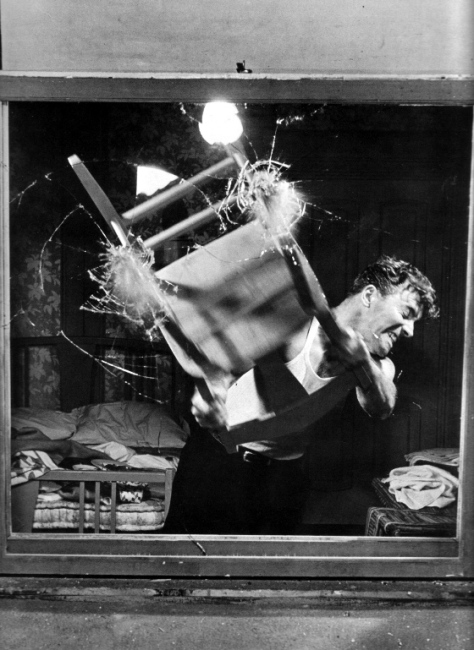 This page provides a full listing of directors credited with a film noir, and the films noir for each director.