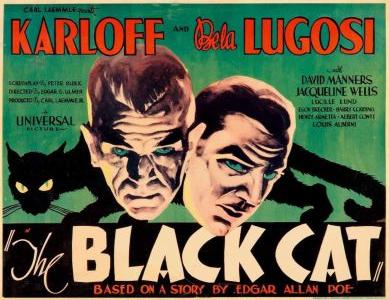 Edgar G. Ulmer’s trash-noir Detour (1945) has a cult following. The film relates a fatalistic story of a guy so dumb he blames fate for the consequences of his own foolishness. Anne Savage, as the street-wise dame who incredulously falls for the sap, is memorable.

Earlier in 1934 Ulmer directed The Black Cat starring Boris Karloff and Bela Lugosi. Loosely based on a short story by Edgar Allan Poe, the movie is a camp masterpiece.  Set in the wonderfully gothic modernist house of a sinister architect, it is a mad expressionist tale of abduction, revenge, sexual obsession, camp horror, and unbridled eroticism.  Sex is the primary motif and there is a sense of unreality with the action moving with the strange fractured incoherence of a dream. In a sense Ulmer prefigures the oneiric and sexual motifs of the classic noir period. A must-see.

This trailer I have created focuses on the pervasive eroticism… see the shapely legs of the comely heroine get the Von Sternberg treatment!
The clip has been blocked by NBC Universal on copyright grounds.