“Melodramatic tale in which a desperate unwed mother (Barbara Stanwyck) assumes the identity of a wealthy woman killed in a train wreck, then faces exposure unless she pays off her blackmailing ex-boyfriend (Lyle Bettger). Director Mitchell Leisen drags out the contrived suds as the woman’s plight deepens until a sordid murder solves her immediate problems. Moral complications arising from the deception and some nasty menace.” Catholic News Service

“When lesser noir pictures fail, it’s often because the actors can’t put across the absurd plot contrivances. Stanwyck makes the most unlikely situations entirely believable; she gathers audience interest and sympathy like a sponge.” Glenn Erickson

“an excellent little thriller, tautly directed by Leisen and with a powerhouse performance from Stanwyck as a pregnant woman who assumes the identity of a young bride killed with her husband in a train crash… constantly surprising and deliriously implausible.” Time Out

“a lurid and artificial tale, loaded with far-fetched situations and deliberate romantic cliché’s. This sort of female agonizing, in which morals are irresponsibly confused for the sake of effect, makes diversion for none but the suckers…” Bosley Crowther – The New York Times

In No Man of Her Own, based on Cornell Woolrich’s novel, I Married a Dead Man (as William Irish 1948), director Mitchell Leisen takes the book’s implausible plot and renders the melodrama as a dark noir tale with a last redemptive twist. Some say it is the grandeur of Barbara Stanwyck’s imposter that carries the film. Stanwyck is great as a tortured woman on the skids who finds a haven in the home of a kind family, but director Leisen and DP Daniel L. Fapp create a cinematic ambience that resonates and amplifies the drama played out in the protagonist’s mind as much as through her physical presence. Lyle Bettger is convincing as the most evil and venal homme-fatale in Hollywood noir, and the rest of the cast is rock-solid. Critics have panned John Lund’s performance as the stricken beau as ‘wooden’. I don’t see it – Lund rightly plays a neglected son who grew up in the shadow of an older outgoing brother as timid and withdrawn.

Strange to say about a film noir, but No Man of Her Own is about decency as much as it inherits the dark nihilism of Woolrich and the contrived entrapment of his heroine in the malevolent tentacles of a malign universe. The decency of a woman who will do anything for her child, of a family that provides succour, and of a man that loves without guile or limit.

Director Leisen employs voice-over to portray inner conflict and an extended flashback to drive the narrative. His use of mise-en-scene for the dark climax brilliantly signifies the heroine’s entrapment after a futile attempt to break out. A car usually the symbol of escape and freedom becomes a prison cell she can’t escape – she has lost control. Unable even to drive the car to evade doom – she is consigned to the back seat while others take over. 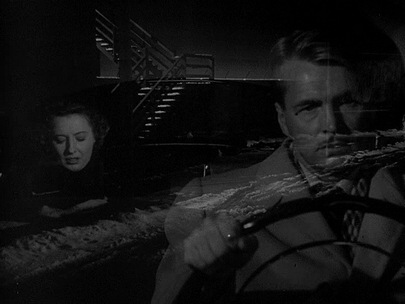