Apology for Murder (1945) Entertaining PRC rip-off of Double Indemnity. Hugh Beaumont plays the sap to Anne Savage’s femme-fatale. Savage dominates in a camp turn that has you wanting more. 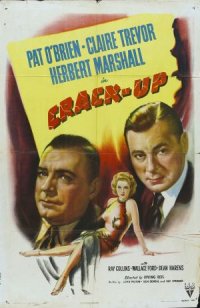 Crack-Up (1946) A rollicking b-thriller. Pat O’Brien and Claire Trevor hunt down art forgery racket.  Some noir overtones and moody photography with the clever use of flashback.

Endless Desire (Hateshinaki yokubo 1958 Japan) A darkly sardonic tale of greed punished by relentless fate. Bravura direction and cinematography, with a hip 50s jazz score. The movie opens with credits passing over a locomotive thundering along the rails – an opening very reminiscent of  Fritz Lang’s Human Desire.  A group of hoods and a wily femme-fatale tunnel for hidden loot with attendant double-crosses and a final triple-cross. A comic side-plot of a young couple’s courtship is nicely intertwined and the femme-fatale seduction of the callow youth is played for laughs. A brilliant climax in teeming rain at night in deserted city streets and the final denouement on an abandoned bridge thrill.

He Walked By Night (1948) A psychopathic killer is stalked by cops. An amazing chase climax in underground drains is the highlight. DP John Alton’s visual poetry offsets zero characterisation.

Highway 301 (1950) A taut crime-doesn’t pay b with Steve Cochran dominating as a savage hood. Cochran’s cold-blooded point-blank murder of a former girl friend is chilling,  and his pursuit of the hapless wife of a dead gang-member is remorseless and unrelenting. The violent dispatch of these women is down-right disturbing.  Memorable drawn-out tour-de-force climax on dark city streets. 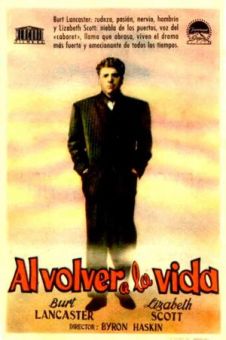 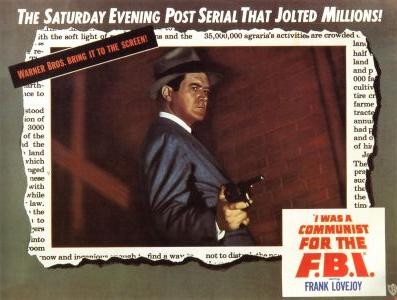 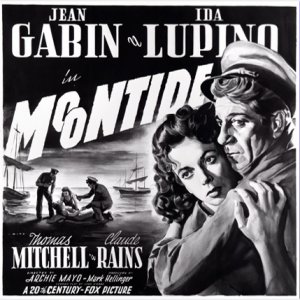 Moontide (1944) Savvy pairing of Jean Gabin and Ida Lupino in a moody noir melodrama by the sea aching with love, humor, fog, and angst.  A nice reversal of noir motifs: a guy with a past, a dame with no future, and an homme-fatale. Gabin in his first Hollywood picture oozes Gallic charm. Lupino you have to fall in love with. Cameron Mitchell is great as the  low- life homme-fatale, with Claude Rains out-of-place as an enigmatic intellectual-cum-nightwatchman. Camp elements like Mitchell flicking Raines’ naked butt with a towel  in a communal shower (behind a low wall of course); Gabin a $2 a day fish bait-seller dressed for his aboard-barge wedding in the most elegant suit this side of Paris; and Raines advising Lupino on her wedding night on the erotic obligations of a wife.  Wonderful expressionist revenge climax on a dark pier at night.  Archie Mayo directed with cinematography from Charles Clarke and Lucien Ballard (uncredited).  Originally a Fritz Lang vehicle he was replaced by Mayo two weeks into shooting.  How much the finished film owes to Lang is an intriguing mystery. 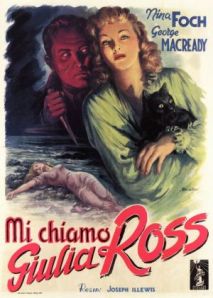 My Name Is Julia Ross (1945) Gothic noir is Joseph H. Lewis’ first notable film. Nina Foch is convincing as abducted young woman whose sanity is under assault. Richly atmospheric but marred by hurried ending after 60 minutes.