In his last role, Humphrey Bogart, as an aging down-on-his-luck sportswriter, is drafted into fronting for a mob-controlled boxer. ( Dir. Mark Robson 109 mins)

After a stunning opening which tracks a series of cars heading to a New York boxing studio, The Harder They Fall, lapses into a visually mediocre boxing movie.  Strong performances from a haggard Bogart, who died not long after completing the picture,  and Rod Steiger as the mobster, keep the interest up, but overall the picture is flat and unmoving.

Bogart’s redemption comes too late and reluctantly, and seems shallow after the avoidable death of a punch-drunk boxer in which he is complicit.

What is interesting is the inclusion of fight fans in the denunciation of the “sport”. Bogart tells the boxer Toro when trying to persuade him to throw his championship fight to avoid getting hurt:

What do you care what a bunch of bloodthirsty, screaming people think of you?  Did you ever get a look at their faces? They pay a few lousy bucks hoping to see a man get killed. To hell with them! Think of yourself. Get your money and get out of this rotten business.

Another cynical touch is the scene where the mob “accountant” insists on itemising the “deductibles” from the million dollar take on the fight leaving the hapless boxer with $49.07 after “overheads”.

Factual Note: The interview on skid-row of real-life ex-boxer, Joe Greb, was not scripted or rehearsed. 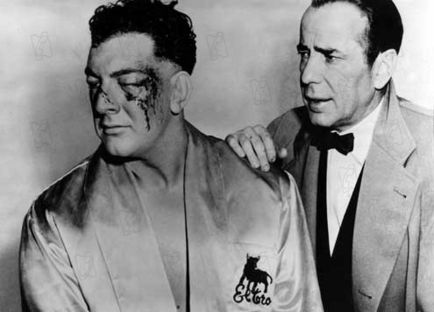