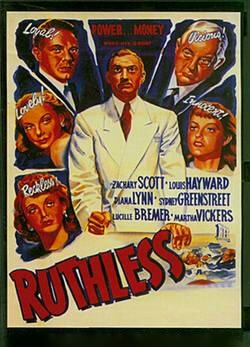 I am ambivalent about Ruthless. The king of B-pictures, Edgar G. Ulmer, was given a bigger-than-usual budget for this Eagle-Lion melodrama. Technically accomplished with a solid cast and a compelling story of an amorally ambitious man, the film never quite achieves an intensity of purpose that would make it truly memorable.

In a scenario reminiscent of  Orson Welles’ Citizen Kane, Zachary Scott plays Horace Vendig, an investment  tycoon who ruthlessly pursues wealth as some sort of revenge against a deprived early childhood. The story is told in flashback sequences triggered by events at a gala reception at his mansion, where he has invited all those he has wronged to announce a benevolent fund for peace, which may be an act of contrition but is more likely a tax dodge.  He claims his act is selfless, but his unrepentant arrogant sense of entitlement is exposed in the closing scenes, which precipitate a suitably noir finale.

Two guests are the initial catalysts for the flashbacks.  The film opens with a middle-aged man of means and a young attractive woman being driven to the reception. The guy is Vic Lambdin (Louis Hayward), a childhood friend of Vendig’s who broke with him after a dispute over Vendig’s callous business practices.  The girl is Mallory Flagg, Vic’s rather mysterious and elegant fiance, who has an uncanny resemblance to a childhood sweetheart of  both men.  It is Mallory’s presence that drives the drama at the reception though she is more a bystander at the finale. Mallory is intriguing and for me upstages all the other protagonists:  you never quite understand her motivation or her loyalty until the very end. She is played with such intelligence and wit by b-actress, Diana Lynn, that she is a joy to watch, and Ulmer certainly thought so – her glittering eyes, her classic profile and elegant movement are lavishly indulged in all her scenes. Strange and sad that her career  never moved beyond b-movies and television. 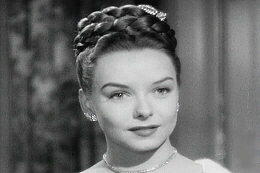