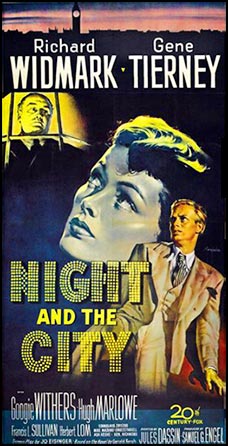 Night and the city.
The night is tonight, tomorrow night…
or any night.
The city is London.

This anonymous voice-over introduces Jules Dassin‘s Night and the City (1950), which has to be one of the great noirs: a near-perfect work.

Dassin crafted a mesmerising study of thwarted ambition and tawdry betrayal into a dark existential journey of the human soul, played out in the dives and night-clubs of post-war London fashioned as the quintessential noir city. This is not a b-movie, the production values are high, and Dassin has total command of his mise-en-scene.

But the achievement is not Dassin’s alone. There is also a literate script by Jo Eisinger, wonderful expressionist photography from Mutts Greenbaum, who cut his teeth in the German silent cinema, and deeply moving portrayals by the major players. Richard Widmark’s performance is frenetic and real, and the soft counterpoint of an achingly elegant turn by Gene Tierney as his girl, transubstantiate Harry’s demise into the stuff of tragedy. Each supporting role is vividly drawn by an excellent ensemble cast.

You know Harry Fabian is doomed from the start: a dreamer of wrong dreams and sympathetically amoral, he is no match for fate and the immoral traffickers of wrestlers and cheap champagne, who plot his destruction. He is a hustler yes, but not in the same league as the big guys, the “businessmen” whose greed has no bounds and whose actions are never tempered by remorse. Harry thinks he knows all the angles, but he is not ruthless enough for that.

Harry. Harry.
You could have
been anything.
Anything.
You had brains…
ambition.
You worked harder
than any 10 men.