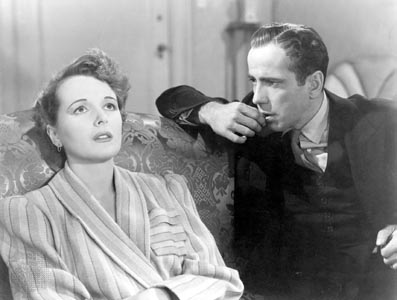 The Maltese Falcon: others may argue about its place in the film noir canon, but none can question its greatness.

Sam Spade is fully the creation of Dashiell Hammett and his book informs the film totally. What John Huston and his ensemble cast did was to make the story forever theirs. Having seen the movie, one cannot imagine any of the characters as other than the players that portray them. This picture is a defining moment in film history. The Maltese Falcon takes us beyond what is on the screen into a nether world of desparate love, existential angst, mystery, and the pain of irredeemable loss.

Spade is the quintessential noir protagonist: a loner on the edge of polite society, sorely tempted to transgress but declines and is neither saved nor redeemed.

Brigid will never make up the years she will lose in prison, and Sam will never recover from the necessary betrayal of their love. For Sam and Brigid are truly lovers. Sam was not seduced. Brigid is not a femme-fatale: she manipulates Sam, but never seeks to have him act as her surrogate. Together they discover the desperate emptiness of their lives. She true to her nature can’t comprehend how he can send her down if he loves her. He can’t fathom her lying while knowing she loves him.

The famous ad-lib by Bogart on the leaden black bird at the end says it all … the stuff that dreams are made of.