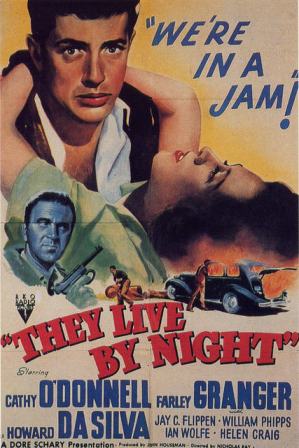 This first feature from Nicholas Ray is a great film in every sense: tight and inventive direction, a sensitive script from Charles Schnee adapted from Edward Anderson’s novel “Thieves Like Us”, moody noir lighting and photography by George E. Diskant, and terrific performances from the two young leads: Cathy O’Donnell and Farley Granger.

From Steven H. Schueur’s book Movies On TV: “… possibly the most romantic crime film ever made. Granger and O’Donnell beguilingly portray an awkward young couple who are forced into becoming ‘lovers on the run’ … Their sympathetic relationship is depicted with sensitivity and touching detail, and the performances are remarkably intense…”

They Live By Night is a tragedy of Shakespearean dimensions and  transcends film noir. The genre is more crime melodrama with noir elements. We know the relationship is doomed to fail in violent tragedy, not because this is a film noir, but as an audience we have seen the crime movies that Hollywood churned out in the 30’s and early 40’s.

The two young protagonists have no way out as they do not have the maturity to make the decisions they are forced to make, and this is telegraphed by Ray at the film’s opening as sub-titles over a scene of the two lovers in the throes of gentle passion: ” … this boy and this girl were never properly introduced to the world we live in … “.

A masterpiece of 40s Hollywood cinema. 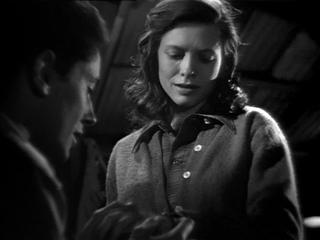