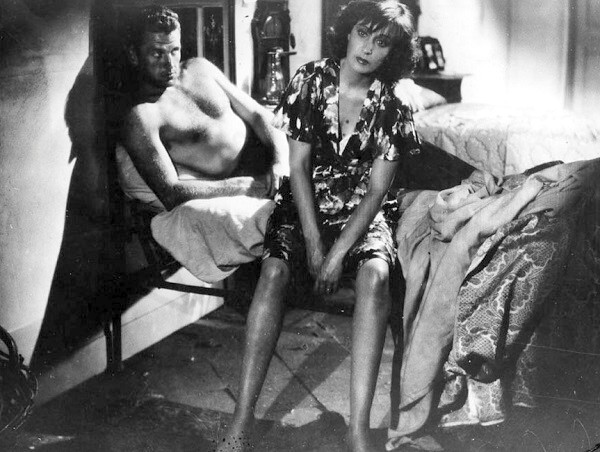 Luchino Visconti’s first feature film Ossessione (Obsession) opens with a darkly melodramatic musical motif as a truck rumbles through a bleak sun-bleached landscape along a slowly curving stretch of road hugging the river Po. The frame is confined within the cabin and we look down and out the windscreen to the unfolding road. We do not see the occupants of the cabin. A relentless fate seems to be driving the truck on its unwavering path as the opening credits roll. The truck eventually does stop with a jump cut to the driver and his off-sider climbing out of the cabin at a rest stop in front of a local trattoria. A hitchhiker is found sleeping in the back of the open tray. He is shaken awake and admonished by the driver and the trattoria’s owner.

The camera in almost a gesture of abandonment swoops up and looks down at the tramp as he heads into the trattoria. The tramp enters the trattoria and hears a woman singing a love song. He follows the voice to the kitchen. The man, Gino, and the woman, Giovanna, the young wife of the trattoria-owner, stare fixedly at each other, as we see their faces for the first time. Gino is young and virile, Giovanna older but molto simpatica, while the trattoria owner is on the cusp of old age and corpulent. This confrontation ignites an obsessive desire the flames of which will ineluctably engulf and destroy them. Thus commences a dance of “death and sperm” as Visconti’s co-scenarist Giuseppe De Santis put it.

Film noir aficionados will recognise this scenario from the opening sequence of the Hollywood adaptation of James M. Cain’s novel The Postman Always Rings Twice. Visconti was given a type-written translation of the novel by mentor Jean Renoir, and made his film without crediting Cain, four years before the Hollywood version. The frank treatment of sex and a homoerotic subtext did not find favour with Italy’s fascist authorities and the film was savagely cut, and the negative eventually destroyed. The film survives because Visconti had secreted a second negative. (The film did not screen in the US until the 1970s because of the breach of screen rights.)

Ossessione is credited as the film that heralded Italian neo-realism, reflecting its concerns with the unadorned lives of the common man, while taking the camera out onto the streets. Although Visconti cast established actors in the main roles, he follows the protagonists as they move in society, with the camera lingering within the mise-en-scène on ordinary people and the rhythm of life in a small semi-rural town. There is also an eddy of melodrama which at critical moments floods the senses as emotions are telegraphed with operatic musical flourishes. Underpinning the film’s aesthetics though is a subversive preoccupation with the anguish of the two protagonists, as they confront the reality and the consequences of their actions. When finally at the end fate closes the books, their destinies assume tragic proportions. That we are being to a degree manipulated though has to be recognised. The husband in keeping with book’s characterisation is oafish, and as his actual demise is not shown, his fate is easily left behind.

What makes Ossessione particularly compelling is an homoerotic strand interwoven with a critique of ‘petit-bourgeois’ values. Visconti was gay and a Marxist. His scenario here has a depth and complexity you will not find in Cain’s hard-boiled prose nor in Tay Garnett’s workmanlike Hollywood adaptation. Visconti confounds the amour-fou of the two protagonists with an interlude that has Gino befriended by a roaming entertainer, ‘Il Spagnolo’, after they share a bed in a flop-house. The dialectic is only thinly veiled. Il Spagnolo represents freedom and a kind of self-sufficient integrity with his itinerant life and rejection of bourgeois values. Giovanna seeks stasis and wants to build up the trattoria as she and Gino take over the dead man’s business – yet there is a dialectic here too. Giovanna accepted marriage to an older man to end her life of poverty and degradation. She makes it clear that hunger had forced her into prostitution. Towards the end of the film, when Gino mistakenly thinks Giovanna has betrayed him to the police, he has an encounter with a young girl who “cannot go home”. This short reprieve tragically harkens to what might have been.

Ossessione demands and rewards multiple viewings. A master film-maker has taken a hard-boiled story and imbued it with intelligence, polemic, a humanist outrage, and above all, a deep compassion for the human predicament.

They stopped making films noir 50 years ago, yet the books on film noir keep on coming.  The study of film noir is career-defining for many academics and noir pundits, and the selling of all those books and scholarly treatises must rake in the readies.

But sorry guys I am starting to get cynical about this plethora of prognostications and chatter about film noir.  Let me tell you why.  I will have to follow some currents and eddies but indulge me.

A new film noir encyclopedia has just been published, and I have been privileged to preview the galleys on-line. ‘A Comprehensive Encyclopedia of Film Noir: The Essential Reference Guide’ by prolific film author John Grant, is a 512 page behemoth that boasts capsule reviews of over 3,500 films. As you would guess the net has been cast far and wide to get this tally, with the publisher’s blurb telling me that the book covers “3,500 movie entries, including not only classic US film noirs from the 1940s through 1960s, but also modern manifestations like neonoirs and erotic thrillers. Films from every continent (except Antarctica)”.

I doubt even Eddie Muller has seen this many noirs, and my current list is only a bit more than 300.  So I will have to take Grant at his word.  Flipping through the book on my iPad, I see all the essential noirs are there, and Grant gets the stories right – something Silver & Ward in their pioneering effort, The Film Noir Encyclopedia, achieve only occasionally in their longer and rather overwrought entries. One thing Grant does do is avoid spoilers and this is definitely welcome.  His entries for the more important movies are longer, and provide some background and snippets on a movie’s aesthetics.  At US$50 it is a pricey but useful reference.

I just don’t believe there are that many noirs!  Let’s be honest. Most b-movies were b-movies: cheap and nasty. There are no doubt some forgotten gems still to be discovered, but not that many surely.  If you want a more manageable program of films that you can actually get hold of savour my list of essential films noir.

Hot on the heels of Grant’s book is a new academic treatise edited by UK academics Andrew Spicer and Helen Hanson, ‘A Companion to Film Noir’, presenting a new range of essays from the usual suspects from both sides of the Pond, and prefaced with an introduction by James Naremore. If you thought Grant’s book was beyond your budget, then this number is strictly for the birds at just below US$180 for the hardcover and US$160 for the Kindle e-book. No prizes for guessing that mere mortals don’t get a review copy. But the publisher Wiley has made the Introduction and a chapter titled ‘The Ambience of Film Noir’ available free on-line here.

A segue that may justify my increasing suspicion that we have an overload of books on film noir. In the introduction to Grant’s book he makes reference to the seminal film journal article in 1946 by French critic and existential intellectual Nino Frank, in which Frank coined the expression ‘film noir’. That year a backlog of Hollywood product hit Paris screens. (During the Nazi Occupation of France from 1941 to 1945 American films were banned).  Frank was struck by the darkness and ambience of a clutch of films that were radically different from Hollywood’s pre-war output. The films Frank wrote about were The Maltese Falcon (1941), Double Indemnity (1944), Laura (1944), Murder, My Sweet (1944), and The Lost Weekend (1945). Wanting to know more about Frank I started searching for references to his writing on film noir, and thanks to Google, I discovered a web site devoted to Nino Frank which hosts an excellent paper on just what was written and discussed in Paris in 1946. Frank’s original article appeared in the French film journal L’Ecran français on 28 August, 1946, and he wrote a follow-up article in another French film journal La Revue du Cinéma in November of that year.

The paper is comprehensive, providing a detailed history with citations. What struck me was that the intellectual ferment in Paris in 1946 produced a synthesis and comprehension of film noir that has hardly been added to since by the myriad books and journal articles that have appeared in the wake of Frank’s first distillation. I commend readers to the paper titled ‘Nino Frank and the Fascination of Noir’ available here, and best of all it is free.

Alain Silver and James Ursini have produced yet another book on film noir. This time they look at the graphics used to market noir movies.  The book titled ‘Film Noir Graphics: Where Danger Lives’ is lavishly illustrated with over 300 full color posters, lobby cards, and other marketing handouts. All the graphics are rendered in high resolution from pristine originals. Many items I have not seen before, and quite a few are for more obscure films that will whet the appetite of many a noir fan.

More a coffee-table short black than a serious study, the book is one you will want to dip into between movie sessions.  There is a commentary of sorts organized by chapters with titles derived from major films noir, such as ‘Touch of Evil’ and ‘Night and the City’.  The narrative is a set of elaborated captions that segue into each other as you move from page to page.  Silver and Ursini attempt to unify their comments by covering the use of noir motifs and how these elements are rendered by the artists who produced the artwork. Differences across studios and countries are identified.  What is interesting is the artistic license taken by some artists depicting scenes and themes which are not found in the actual movie.  There is a degree of repetition in the text from chapter to chapter, and sometimes the commentary jumps across pages and you find that you are not quite sure which graphic is being referred to.

Whether the US$40 price-tag is value for money is debatable.  The internet is a treasure trove for poster addicts, with such sites as movieposterdb.com offering free downloads of high-res images organized in a searchable database.  It comes down to the value you place on the commentary, which does offer some insights. What is missing is a wider survey of the role of graphics in movie marketing, and a behind the scenes look at who the artists were and how the material was produced.

You can buy the book from Amazon. An eBook version is not currently available.