The weird story of a deranged con-artist and killer who marries into a wealthy San Francisco family, while told in the third person, reveals the thoughts and motivations of the central character, an attractive 30-something divorcee… 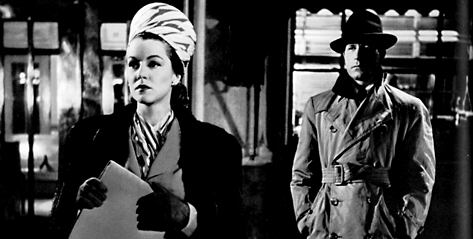 Born to Kill is based on the book ‘Deadlier than the Male‘, the only novel of American writer James Gunn, who wrote the book in 1943 at the age of 23. Little is known of Gunn ‘s life, and he remains a tantalizing mystery. The novel is like no other noir fiction. The weird story of a deranged con-artist and killer who marries into a wealthy San Francisco family, while told in the third person, reveals the thoughts and motivations of the central character, an attractive 30-something divorcee, Helen Brent. In a review in 2008 of the re-issue of the book by Black Mask Publishing, British academic Robin Durie said of the novel:

It’s very hard to imagine the almost hallucinatory events of the novel translating to the big screen in 1947 [in Born to Kill] – although it’s just about possible to imagine John Waters or David Lynch making some headway with it. It’s also possible that Claude Chabrol might have fancied having a go at turning it into a movie, based on his admiration for the book: “It has a freely developed plot and an absolutely extraordinary tone, pushing each scene towards a violent, ironic and macabre paroxysm…an unexpected dimension, a poetic depth… Of course, nothing like this has ever been written before. The parody is wildly inconsistent, but Deleuze is surely right when he says that, by this means, Gunn creates directions in the real which are wholly new.” … At the same time, Chabrol is correct in his capturing of the intensity of the rhythm of Gunn’s writing. Each chapter builds – or perhaps better, meanders – towards, or into, extraordinary points of what are, in effect, bifurcations. It is as if the novel is following those bifurcating pathways described by Borges.”

In 1947 RKO had a go and commissioned Eve Greene and Richard Macaulay to develop a script, with Robert Wise directing. A solid cast was assembled, and the result was a ripe melodrama that retained an aura of the novel’s strangeness. The film succeeds on the powerhouse performance of Claire Trevor as the divorcee, and (to a lesser extent) the almost dead-pan portrayal of the homicidal psycho by chronic bad-boy Lawrence Tierney. Trevor chews up the scenery with her vitriol and seething passion. A character in the movie describes her biblically: “I find more bitter than death the woman whose heart is snares and nets. And he who falls beneath her spell has need of God’s mercy.” Esther Howard, Walter Slezak, and Elisha Cook Jr. add value in supporting roles. Director Wise and DP Robert De Grasse take a back-seat and let Trevor’s nervous energy and sexual hunger drive the narrative. The camera and mis-en-scene literally make way for her as she struts across the screen, and Paul Sawtell’s score captures the histrionic undertow beautifully.