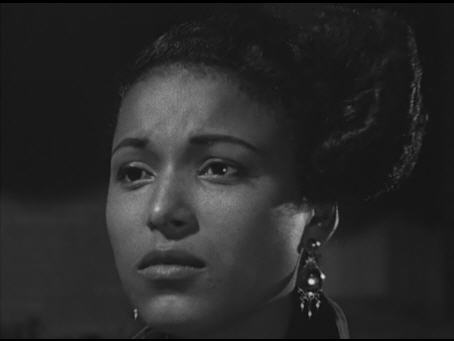 If during the 1940s and 1950s Hollywood was not actively racist, it still largely ignored race. Some academics have gone so far as saying that film noir was essentially a manifestation of a transference of a fear of blackness, the other, to a noir nether world of ambivalence and sublimation. But my view is to the contrary. If you look at noir movies over the classic period from the early 40s to the late 50s, a significant number of progressive writers and directors made noirs that deal sympathetically with race as important elements of the story. This is more than can be said of the body of Hollywood output for the period.

Here I would like to cover some of these noirs from 1941 through to 1956. The Harry Belafonte produced Odds Against Tomorrow (1959) is not included in this discussion, as we are dealing here with white Hollywood’s portrayal of blacks.

Blues in the Night (1941) An unusual melodrama cum musical with a leftist heart and a killer performance by Betty Field as cheap femme-fatale. Blues in the Night is a fascinating musical noir melodrama about a budding white jazz band scripted by Robert Rossen, directed by Anatole Litvak, and atmospherically lensed by Ernest Haller, with a b-cast, including a very young Elia Kazan, as a dizzy jazz clarinetist. These impeccable leftist credentials are reflected in the plot and the resolution which talk to personal integrity and the values of solidarity and loyalty. Amazingly for the period an establishing scene in a police lock-up respectfully credits the music’s black roots. A black prisoner is given a lot of screen-time as he sings a blues number and the white cast listen awe-struck.

Body and Soul (1947) This masterwork from Robert Rossen is a melodramatic expose of the fight game and a savage indictment of money capitalism. The powerful screenplay by Abraham Polonsky is brought to the screen with an authority and beauty that is still breathtaking. From the editing to the photography and direction, the film is a work of art. The black actor Canada Lee has a substantial role as a damaged ex-boxer, whose tragic death following a brutal betrayal by a crooked white promoter is one of the film’s central elements and perhaps the most affecting scene in the film.

The Reckless Moment (1949) Max Ophuls takes a blackmail story and infuses it with a complexity and subtlety rarely matched in film noir. Ophuls’ last Hollywood picture is a great film. It is a brilliant example of the dynamics of the auteur working inside the studio system. Ophuls’ long and fluid takes and subtle mise-en-scene infuse the movie with a rare subtlety. Joan Bennett as the threatened middle-class housewife, Lucia Parker, and James Mason as the Irish blackmailer Donnelly, are both impeccable, but it is Joan Bennett as the wife and mother plunged into a noir world of criminality that carries the drama forward. She struggles to defend an idyllic domesticity against a rising tide of darkness that would engulf her family. Lucia’s black maid, Sybil, plays a central role in the film. The Canadian film critic Robin Wood has written: “Sybil, and the splendid actress [Frances E. Williams] who plays her, deserve comment… The film’s presentation of her represents a drastic break with the conventional demeaning stereotype of the devoted black maidservant. Sybil’s hovering presence is a recurring leitmotif throughout the film, Ophuls taking every opportunity to show her watching and listening in the background of scenes in which (because of her social position) she is denied active participation. The empathy she manifests for Lucia is altogether different from the servile devotion to family of the stereotype she superficially resembles but from which she so drastically departs: it is essentially the concern of a woman who is fully aware of her oppression for another who is equally oppressed but unable to recognize the fact… In certain ways she resembles John (Art Smith), the mute servant of Letter From an Unknown Woman, the point being that their very exclusion from participation in the affairs of their employers (John by his handicap, Sybil by her colour) gives them a distance that makes possible a heightened awareness.”

Juano Hernandez in Young Man With a Horn (1950)

Young Man with a Horn (1950) A fine melodrama with true pathos, great jazz, and an intelligent screenplay by HUAC blacklistee Carl Foreman. Young Man with a Horn is loosely based on the biography of jazz trumpeter Bix Beiderdecke: the story of how a lonely white kid in LA learns the trumpet from a black musician, who becomes his close friend and mentor. His shift to New York in pursuit of a career is the stuff of melodrama; young guy makes good, marries the wrong woman and abandons his friends, and after tragedy finds a kind of redemption. There is great jazz played by Hoagey Charmichael and Harry James, nice songs from a young Doris Day, solid acting from Kirk Douglas in the lead, Lauren Bacall as the wife, Juano Hernandez as the black trumpeter, and Charmichael as Douglas’ piano-playing buddy. The strength of the film is in the script by Carl Foreman (who during filming of his script for High Noon in 1951 appeared at HUAC and was later blacklisted by Hollywood studio bosses). Redemption for the young man with the horn comes from a realisation – triggered by the tragic death of his black mentor – that a great artist’s obsession with his craft is not the only requirement for artistic fulfillment – it cannot come from a sterile wedding of player and instrument but ultimately from a deeper maturity which comes from embracing human relationships and commitment – a responsibility to and for others. The mentor’s death and its immediate precedent lend a true pathos to the melodrama, and the prominence given to the black father-figure in a film of this era is a revelation.

The Set-Up (1949 ) Robert Ryan is great as washed-up boxer in Robert Wise’ sharp expose of the fight game packed into a lean 72 minutes. From RKO and filmed at night on a studio lot, this movie is brooding and intense, with Robert Ryan, as the aging boxer, “Stoker” Thompson, in perhaps his best role. The boxers’ dressing room, where Stoker’s essentially decent persona is established from his interactions with the other boxers, is beautifully evoked. Each person in that room is deeply and sympathetically drawn, and these scenes are enthralling. To the movie makers’ credit, remember this is 1949, there is a black boxer, who responds to Stoker’s friendliness, with a heart-felt wish of good luck, after winning his own fight.

The Big Night (1951) Joseph Losey’s last American movie is a powerful and affecting drama of a white boy crossing into manhood one big noir night. During the young man’s dark journey, he confront his own racism, when he encounters a young black woman after being moved by her beauty and soulful singing in a night-club. A close-up of the singer renders her pain as important as the central protagonist’s bewilderment and regret.

The Well (1951) This movie deals explosively with race and mob hysteria. Up there with Fritz Lang’s Fury (1936) and Cy Endfield’s The Sound of Fury (1950). The seeming tolerance of small town is shattered when a white mining engineer is accused of abducting a 5-yo black girl. The girl’s family is given equal billing in this adventerous picture, which received AANs for the screenplay and editing. The reconciliation at the end is idealistic but fragile.

The Killing (1956) Kubrick’s heist movie has a bloody savage climax. ‘Individuality is a monster, and it must be strangled in its cradle… ‘ In a pivotal scene a black parking attendant confronts the reality of prejudice when push comes to shove.

POSTSCRIPT:
To these films should be added No Way Out (1950) and The Breaking Point (1950). In No Way Out a young black intern’s struggle against the prejudice of a deranged criminal confronts the issue of race head-on. A white woman is redeemed by her decent self opening to the other: black people who show her a path to a life of decency free of prejudice and self-loathing. In The Breaking Point the death of a black man is for society of little consequence, his despairing boy ignored and left to discover the fate of his father alone – completely alone – a closing scene that is the most subversive and poignant in all of film noir.

33 thoughts on “Race and Film Noir: Black and Noir”