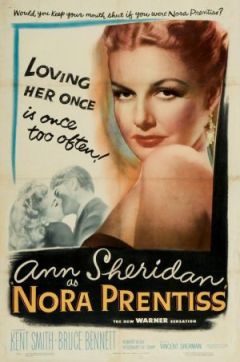 “You had something on him
What was it?
…
Doctor Talbot was a respected member of the community
He lived in the same house on the same street
Year after year
Every one admired him, looked up to him
But then something happened, he did something
Something that gave you a hold over him
What was it? What was he hiding? What did he do?”

According to the Motion Picture Herald, of the 298 top-grossing films for 1945-56, only nine were noirs (Spicer, Film Noir, 2002 ,p41). One of those movies was Nora Prentiss.  As a Warner Bros a-feature it ran for 111 minutes and though largely studio-bound, featured top-draw production values.

Though slow in the beginning, Nora Prentiss, once the noir scenario is established, develops into a dark melodrama of tortured loyalties and thwarted passions.  Steady direction from Vincent Sherman (The Damned Don’t Cry, The Unfaithful, The Garment Jungle) with the fluid camera of James Wong Howe,  and a brilliant pulsating score from Franz Waxman, deliver classy Hollywood melodrama.  The lovely Ann Sheridan as always is truly engaging as Nora, and the rather stolid Kent Smith despite his limitations delivers a solid performance as the noir protagonist. 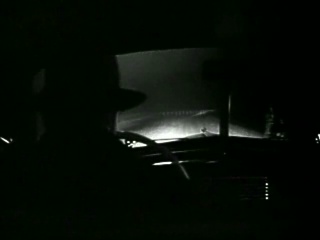 A doctor, Richard Talbot,  living the “father-knows-best” dream in a San Francisco suburb is catapulted into the dark chasm of noir angst, when he falls for cabaret singer Nora.  The film opens with a twist on the classic noir flashback narrative.  A guy who we only see in profile has been arrested for the murder of  the doctor and refuses to talk even to his lawyer. We move from the suspect in his holding cell to a delightful Spring morning in a Frisco bungalow  where a comfortable upper middle-class family sits down to breakfast.

Dr Talbot is settled in a successful career and lives a scheduled orderly passionless existence.  One evening a young woman is knocked over by a car as the doctor is leaving his surgery for the evening – he goes to her aid – enter a sassy uninhibited Nora.  Richard is free the for weekend, with his wife and kids away – you get the picture.  The affair blossoms into love, but Richard hasn’t the resolve to leave his wife. One evening a very ill patient arrives at the surgery after-hours. The camera and lighting have gone to noir: an irrevocable decision born of desperation unleashes a maelstrom of dark deeds, deceit, and tragedy. Fate is truly majestic in retribution with a twist that seals the good doctor’s doom.  As bleak an ending as any noir before or since.