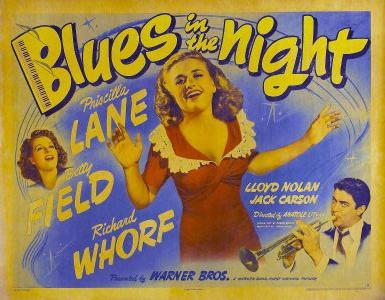 Blues in the Night (Warner Bros 1941) is a fascinating musical noir melodrama about a budding white jazz band scripted by Robert Rossen, directed by Anatole Litvak, and atmospherically lensed by Ernest Haller, with a b-cast, including a very young Elia Kazan, as a dizzy jazz clarinetist. These impeccable leftist credentials are reflected in the plot and the resolution which talk to personal integrity and the values of solidarity and loyalty. Amazingly for the period an establishing scene in a police lock-up respectfully credits the music’s black roots. Tied up in all this is a noir arc with a hood played by Lloyd Nolan and a killer performance by Betty Field (an actress who sadly went nowhere) as a cheap femme-fatale.  The socially aware feel-good ending is tempered by the noir-like denouement for the hoods and the femme-noir.

This movie is a serious contender as a seminal film noir,  remembering The Maltese Falcon was made in the same year, Stranger On the Third Floor only a year earlier in 1940, and Double Indemnity a full three years later in 1944.  Check out the filmsnoir.net trailer: