The Set-Up from noir director, Robert Wise, is a sharp expose of the fight game packed into a lean 72 minutes. From RKO and filmed at night on a studio lot, this movie is brooding and intense, with Robert Ryan, as the aging boxer, “Stoker” Thompson, in perhaps his best role, with a great supporting cast. The boxing scenes are as real as they get: Ryan himself was a college boxing champ. The arena is brilliantly filmed with focused and repeated shots on selected spectators, which portray not only the excitement, but also the unadorned mob brutality, that reaches fever pitch as the fighters struggle to a climactic finish.

The film opens and ends with zoom shots of a street clock: starting at 9.05pm and ending at 10.17pm – yes – the actual length of the picture… 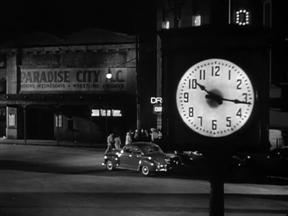 There are other interesting visual commentaries on the action which mock the existential angst of the protagonists: 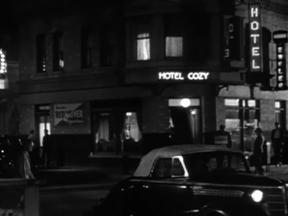 The boxers’ dressing room, where Stoker’s essentially decent persona is established from his interactions with the other boxers, is beautifully evoked. Each person in that room is deeply and sympathetically drawn, and these scenes are enthralling. To the movie makers’ credit, remember this is 1949, there is a black boxer, who responds to Stoker’s friendliness, with a heart-felt wish of good luck, after winning his own fight. 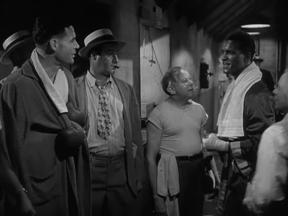 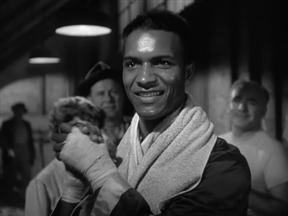 A simple story of gut-wrenching humanity. One of the great noirs.

The Set-Up has been packaged with four other films noir in the DVD set Film Noir Classic Collection Vol. 1

. The other movies in the DVD set are the noir classics: The Asphalt Jungle, Gun Crazy, Murder My Sweet, and Out of the Past.