An under-rated film noir from director Fred Zinnemann, Act Of Violence is to my mind one of the great 40s noirs.  A strong story and fast-paced direction combine with brilliant moody photography from Robert Surtees to deliver a solid cinematic experience. The noir themes of the damaged war veteran and a protagonist desperately trying to break free of the past are woven into a dark scenario of entrapment.

The idyllic family life of a vet, Frank Enley (Van Heflin), living the good life in a small town outside LA but harboring a dark secret, is torn apart by another vet, Joe Parkson (Robert Ryan), with a gun and a terrible unrelenting need for vengeance.

Zinneman has compete control of his mise-en-scene. The movie’s opening scene showing a dark figure in long shot against NY harbor limping hurriedly towards a tenement in the rain at night, telegraphs the darkness to follow without a line of dialog. The tension is established when the man is seen in an apartment hastily packing a revolver and filling a suitcase before boarding a bus for LA. When he tracks down his target the bright world of a loving family, a successful business, community respect, and fishing on the lake, becomes progressively darker and dangerous, and the action moves from comfortable suburbia in daylight to dark threatening city locales at night. A fishing trip is cut short, but not before a strong wind across the lake occasions a sense of unease.  Back home, life for Frank’s unsuspecting young wife (Janet Leigh) and their small child is turned upside down when he returns a scared desperate man in terror of what lies outside his placid suburban garden.  First the lights go out, and then as each shade in the house is drawn down in turn, the dream is transformed into a nightmare.  A man with a limp shuffles outside and tries the doors of the house. In the darkness, a dripping kitchen tap which in the distraught silence is like the sound of a fast-beating heart, attests to the terror of the moment.  Later on with considerable irony, in the confines of an LA hotel fire-escape, Frank reveals to his wife the terrible truth behind this calamity, lamenting that there is nothing he can do to escape his pursuer. 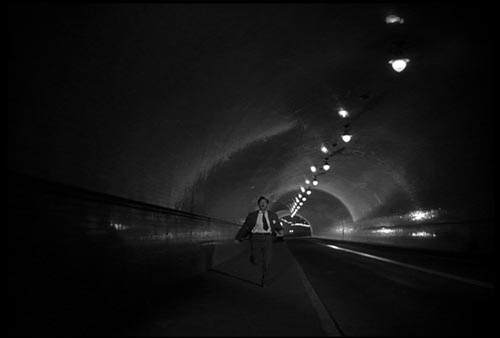 Shortly after, in flight from Joe, Frank running desperately down dark desolate and dirty city streets, lands in a bar, where he hooks up with an aging b-girl played by Mary Astor. She takes him home and in a calculated act of ‘charity’ then takes Frank to a dive to meet a shyster lawyer who she says can help him. A plan is hatched with a goon to get rid of the pursuer for 10 grand, and Frank spends the night at the girl’s apartment. Next morning he comes to his senses and confronts what has to be done.

The final climactic scene is played out in long-shot and in deep focus, night-for-night on a railway platform.  The stuff noirs are made of. 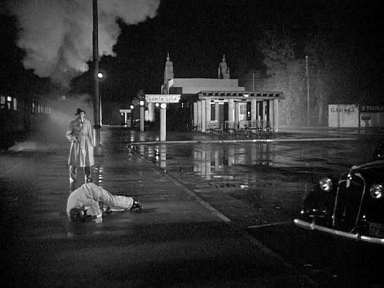