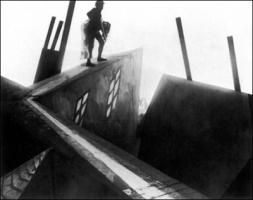 Matt Holmes has posted an interesting article on the Obsessed With Film blog: The Cabinet of Dr. Caligari: Suffering creates art?, where he explores the historical context of the film, and the influence of adversity on creativity. He also says that German expressionism is a major influence on the film noir genre:

Like the great speech from Orson Welles in The Third Man, who said that times of war and suffering bring out the most creative and artistic periods in history, Caligari is a testament to the human spirit and a way of how expression through film was a way of venting your social state.

The Cabinet of Dr. Caligari was the precursor to the great Universal horror movies of the 30’s and influenced the whole genre of film noir. You can see elements of German Expressionism in every single one of Tim Burton’s movies, must explicitly in the character of Edward Scissorhands (a double for Cesare), The Penguin (a double for Caligari) and the whole of Sleepy Hollow, The Nightmare Before Christmas and Ed Wood (the painted sets).