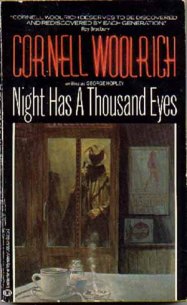 I was left alone there a long time. I could see, all right, and know the things about me. My car was there at the curb, glistening in the dark, with a thin ripple of wet orange paint running down its hood in one place where the light from the doorway struck out at it. A ripple that never moved, and yet was warped and liquid as running ripples are. I even shifted once, from where she had left me standing, and moved over to it, and stood up close beside it, my hands pressing down tight upon the top of the door, as if I were unsteady and needed something to cling to in order to remain upright. My head inclined, as if peering intently at the upholstery of the seat backs.

Yes, the car was real, it was there. My hands could feel it, my eyes could see it, I had but to touch a button to make light shoot out of it, light that no shadows could withstand; but yet the shadows had the best of it, it was powerless to rive this pall that blanketed the eyes that looked at it, the mind that considered it. It could not take me out of the shade, it was I who had brought it into the shade with me; its powers of contrast were lost, it became one with the other Gothic shadows about me. For the shadows came from within, and so anything they fell upon was shadowed. Just as if you front your eyes with a piece of smoked glass, the most sparkling sunlight will become somber.

Each unto himself has his own world that he looks out upon, and though someone else were to stand on the very selfsame inch of ground your feet were placed upon, guided by chalk marks, he would not see the same things you did. There would have been two different views there, not just one. Or is there any world at all, I wondered, out there before us as we look upon it; may it not be inside, behind the eyes, and out front nothing, just a blank infinite? But madness lurked along that trail, and I quickly turned aside.

5 thoughts on “Cornell Woolrich: The shadows come from within”