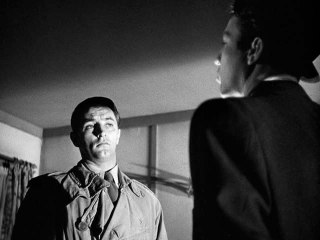 Leonard Quart in an article, Noir in New York, on the recent New York City Noir festival for the Berkshire Eagle, has made an interesting observation, which is also my take on film noir (my emphasis):

Both these films [Taxi Driver and Klute], despite utilizing some of noir’s imagery and stylistics, explore their central characters in greater depth and depict a city much more particular and less formulaic in its rancid corruption and violence than traditional film noir. Emphasizing the psychological and aesthetic, neither film ever makes grand political and social statements. And despite the tendency of some critics to write about the genre itself as a mirror of the bleakness of life in a postwar urban America burdened by the oppressive weight of a Depression, WW II, and the Cold War, the fact was that American cities were generally prosperous and safe in those postwar years. In the words of “Taxi Driver” scriptwriter, Paul Schrader, film noir was “more a creation, rather than a reflection.” … Obviously, some noir films could be wonderful, and others dreadful. But they were films that always should be understood on their own terms, rather than mined for portentous subtexts. At their best they were well-wrought, atmospheric, suggestive entertainments.

To my mind, films noir are first and foremost entertainment, and any film must be first understood simply from what is on the screen.