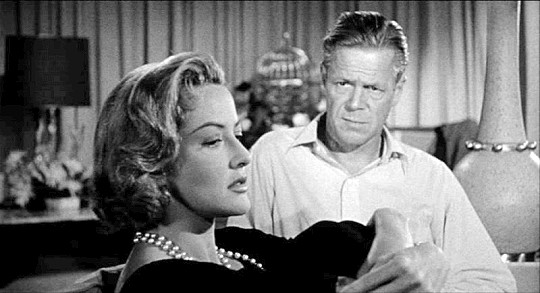 One of the few films where David Goodis adapted his own novel for the screen, The Burglar is a brooding story where decency is a ‘dark passage’ to destruction.

A flashback provides the back story of an abandoned boy brought up by a kindly thief who adopts him, and apprentices him to the ‘trade’.  The adoptive father is killed in an abortive heist when the boy’s first mistake on the job triggers an alarm. The dead man has previously extracted from the boy the promise that if something happens to the father, he will look after his young daughter. The story pivots on this obligation and the complications that ensue when the burglar the boy has grown up to be steals a valuable necklace – aided by the girl and a motley crew of accomplices.

Dan Duryea is the thief and Jayne Mansfield is the child-woman under his wing, who is otherwise employed in the kitchen or casing heists. Duryea delivers in a role where what is not expressed is where the action is. The limitations of Mansfield in an early role render her believable as a simple girl struggling to make sense of the life she has fallen into, and her ambivalent relationship with Duryea, who is tormented by his warring paternal obligations and the underlying attraction they have for each other.  In the noir universe such dilemmas are always resolved at a cost.

A crooked cop is involved in that denouement, which is telegraphed after an interlude where Duryea hooks up with a women in a bar, played at first as a tough dame but then with real pathos by Martha Vickers.  There is a rare for noir tenderness in the scenes that follow when these two damaged souls open up to each other. This night of refuge is followed by a brutal betrayal the next day, and here a jarring plot hole almost pushes the scenario off-course, but it quickly swerves back onto the road to nowhere.

The film’s budget was only US$90,000 and perhaps was one of the last b-movies delivered of the signature gritty realism of Columbia Pictures.  But the picture has a patina that belies it’s budget, with truly accomplished cinematography from DP Don Malkames, and taut editing and elegant direction from first-time director Paul Wendkos. All carrying a stunning wide-screen realist austerity from a deep focus on-the-streets ambience.

A worthy valedictory to the b-movie.