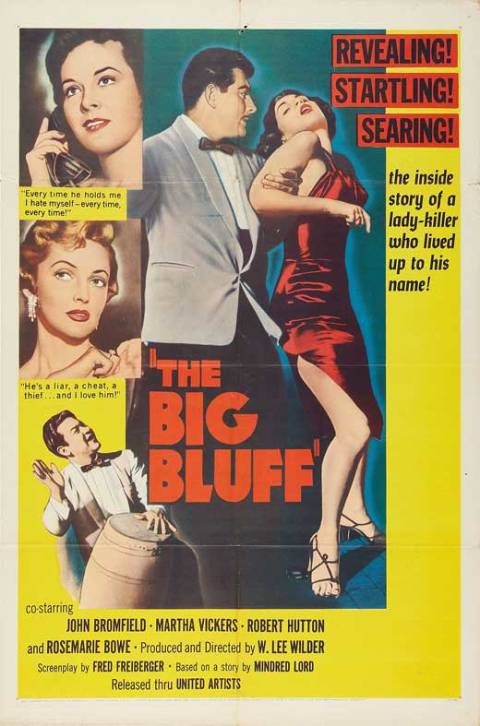 The lurid original posters for The Big Bluff are those rare cinematic documents, where the movie promoted is actually sleazier than the posters would have you believe.

A suave grifter latches on to a dying woman with dough, only he is impatient to see her gone.  His evil machinations are his undoing.  The sheer perversity of the scenario and its relentless immorality leave you stunned.  Don’t go figuring this is a cinematic experience. It has the bitter flavour of festering reality, and is played out in a fetid LA where evil ambition and a conniving race to the bottom suck you down into a putrid swamp.  The homme-fatale is tripped-up in a quintessential noir dénouement, twisted and out of left field.

A b-movie par-excellence that is so compelling it feels much longer than the economical 70 minutes it takes to go from melodrama to perdition.

Director W. Lee Wilder, Billy Wilder’s estranged brother, and DP Gordon Avil, keep the action up, with some crazy antics like what-the-heck low angle and point-of-view shots that keep you unsettled in flash noir style, not to mention some tawdry kissing that literally mists up the screen.

Check out the cheap cabaret act featuring a floozy so vulgar you are in no doubt of where you are headed.

6 thoughts on “The Big Bluff (1955): The bitter flavour of festering reality”