The best account of the Surrealist fascination with cinema as a whole can be found in Paul Hammond’s witty, perceptive introduction to ‘The Shadow and Its Shadow: Surrealist Writings on the Cinema’… Hammond, who is also the translator of this edition of Panorama, reminds us that during the years immediately after the First World War, the original Surrealists used movies as an instrument for the overthrow of bourgeois taste and the desublimation of everyday life. Engaging In what Hammond describes as “an extremely Romantic project” and an “inspired salvage operation,” [André] Breton and his associates would randomly pop in and out of fleapit theaters for brief periods of time, sampling the imagery and writing lyrical essays about their experiences. Like everyone in the historical avant-garde, they were captivated by modernity, but they particularly relished the cinema because it was so productive of the “marvelous” and so like a waking dream. Willfully disrupting narrative continuities, they savored the cinematic mise-en-scene, which functioned as a springboard for their poetic imagination; and out of the practice they developed what Louis Aragon called a “synthetic” criticism designed to emphasize the latent, often libidinal implications of individual shots or short scenes. Even when cinema became too expensive for Breton’s style of serial viewing, it remained the fetishistic medium par excellence. At certain moments, even in ordinary genre films or grade-B productions, it could involuntarily throw off bizarre images, strange juxtapositions, and erotic plays of light and shadow on human bodies, thus providing an opportunity for the audience to break free of repressive plot conventions and indulge in private fantasies.

Naked Alibi an unpretentious b-movie from late in the classic noir cycle has just such a surreal quality. Whether from the cheapness of the production, the bizarre plot, or the literal darkness of much of the film, the picture is not so much a banal pastiche of noir motifs and set pieces, but an oneiric hallucination where characters from other films noir assemble onto a movie lot by some perverse twist of fate, and play out an adventure that makes as much sense as Luis Bunuel’s L’Age d’Or.

Made by a bunch of stringers – bar the great Russell Metty who lensed – the movie holds a strange fascination. Shot in the flat TV-style that emerged in the 50s there is little to recommend the picture as a cinematic effort – though Metty and director Jerry Hopper do hit some scenes out of the park, thanks to a peppering of classic film noir lighting and framing, and a theatrical final shootout across rooftops.

Stars Sterling Hayden and Gloria Grahame each wander in from some other set, Hayden perhaps taking a breather from Crime Wave and Grahame on the loose from Human Desire. Hayden is a cop who is fired after he pursues a model-citizen played by Gene Barry for the killing of the three cops – Barry has an angelic wife and a baby in a crib. The big surprise is Barry, who later made it big on TV as Bat Masterson. As the villain leading a truly bizarre Jeckyll & Hyde existence as a small-town baker – in one scene he is shown in his store icing a cake! – who falls foul of the law after he is picked up as drunk and disorderly, he leaves Hayden and Grahame behind in a wake of attitude and booze. But the motive for the killings is so flimsy you can’t understand why Hayden doesn’t give it up, tailing the suspect until Barry can’t take it any more and leaves town to “calm his nerves”. Apparently the baker takes regular business trips on his own, so the wife and kid are left behind. The plot is moot on why a baker would need to make business trips. Anyway.

Hayden pursues Barry down to a Mexican border town where Barry is revealed as a chronic drunk and mean racketeer, after Grahame is shown flashing a lot of flesh as a chanteuse in a cheap dive. It turns out Barry is Grahame’s long-lost boyfriend. Barry’s reunion with Grahame is particularly sordid and sexually charged. A classic triangle ensues. One thing leads to another, and Hayden gets his man on ice and Grahame checks out in Hayden’s arms after stopping two bullets from Barry’s gun in a low-rent reprise from Fritz Lang’s The Big Heat from the year before.

Take with a lot of booze. 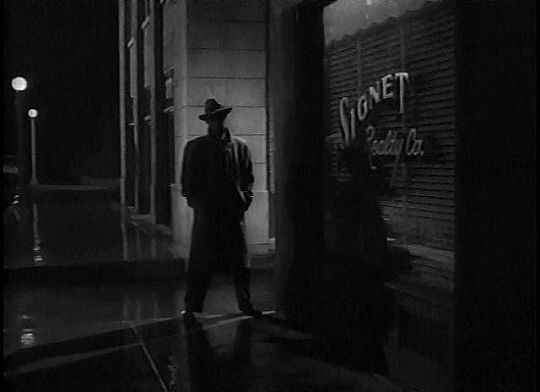