An early effort from director Joseph H. Lewis is a quintessential b-movie filmed in 3 weeks on a studio back-lot for less than 200 grand…

An early effort from director Joseph H. Lewis (Gun Crazy and The Big Combo) So Dark the Night is a quintessential b-movie filmed in 3 weeks on a studio back-lot for less than 200 grand. A psycho-melodrama if you will that explores the split personality as psychosis with the alien-self as doppelgänger. The movie is of interest not so much for the premise or the plot, but as a showcase for how routine material can be made exceptional by a talented director. Lewis had a French village convincingly manufactured on an old studio set. He even managed to send a camera to Paris to film some ‘scenic’ shots for the opening credits. Revealing the major story elements risks giving too much away. What I can say is that the plot concerns a famed Paris bachelor-detective who confronts love and mayhem in a small rural village after he is sent there on r&r. While the lead role would have worked nicely for Peter Lorre, ex-pat Austro/Hungarian character actor Steven Geray actor does try hard as the love-lorne detective.

Lewis uses windows and mirrors to excellent effect in his mise-en-scène, and elegant camera angles and staging to render compositions that create visual interest throughout. Indeed, the whole affair could have played as a silent movie while retaining the suitably melodramatic score from Hugo Friedhofer. This is both a strength and a weakness. The fascination a young woman feels for the Parisian glamour symbolically evoked by close-ups of the shining chrome on an automobile, and expressive close-ups on faces, work well. But certain pivotal scenes featuring rather forced averted gazes come across as hackneyed. 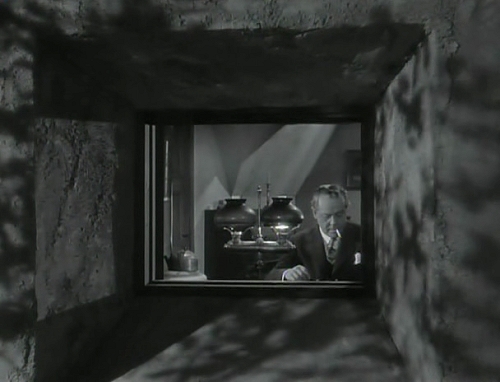