It is not so much Mamoulian’s inventive camera angles and breakthrough use of voice-over in a Hollywood talkie, or the consummate chiaroscuro lensing by DP Lee Garmes… 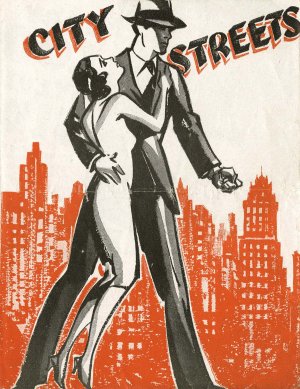 Rouben Mamoulian’s classic 1931 expressionist gangster flick from 1931 City Streets was based on a treatment by Dashiell Hammett.

It is not so much Mamoulian’s inventive camera angles and breakthrough use of voice-over in a Hollywood talkie, or the consummate chiaroscuro lensing by DP Lee Garmes, or the hard-boiled patter from scenarist Oliver H.P. Garrett, that distinguish the movie as an early noir, but Hammett’s off-beat story and characterizations.

Fernando F. Croce in his expressive (undated) capsule review at cinepassion.org  nicely renders the film’s mood: “From beer to ocean, from metropolis to nature on a speeding buggy, that’s the surrealism at play here, Dashiell Hammett’s. Trucks as they roar over the camera and the tinkling of bottles at the distillery figure in the opening city symphony, promptly added is the pugnacious refrain (“No hard feelings?”) which, followed by a handshake, becomes the kiss of death. Gangland baby (Sylvia Sidney) and naïve cowpoke (Gary Cooper) at the fairgrounds, sharpshooters in love navigating through symbols (crashing waves, caged and stuffed birds, porcelain cats). Taught to keep mum, she’s caught getting rid of the gun after dad (Guy Kibbee) bumps off a fellow hoodlum (the police station reappears in Le Doulos) and ends up behind bars; inside, Sidney vows to leave the racket while outside Cooper embraces bootlegging for The Big Fellow (Paul Lukas). “The Law don’t look so good when it works both ways, uh?” Rouben Mamoulian’s take on American crime is a European one akin to Sternberg’s, tough and dreamlike: An underworld party is literally punctured with some nasty business involving a fork (a band playing “Happy Days Are Here Again” swiftly covers it up), yet the idea of an unfolding murder measured in the ash of a cigar might be out of Cocteau’s Le Sang d’un Poète. The high-angled view of the checkered-floor mansion gives it a de Hooch perspective, the low-angled view of prison walls and windows slants them toward Brutalist architecture. The heroine’s inner monologue in the cell is an elaboration of Hitchcock (Murder!), who in turn elaborated Mamoulian’s overlapping close-ups of Cooper and Sidney (dolly-in, dissolve, dolly-out) for The Wrong Man’s crucial revelation. Quite the wry gangster sonata, with a vengeful moll (Wynne Gibson) and a car chase on the edge of the abyss setting the stage for Dr. Jekyll and Mr. Hyde.”  [The  1931 version of Dr. Jekyll and Mr. Hyde was Mamoulian’s next picture.]

Both The New York Times and Variety in 1931 gave the movie a strong endorsement, but it was an unnamed staff writer in a review in the April 27, 1931 issue of  TIME Magazine that had the prescience to see the makings of a new kind of American cinema:

City Streets (Paramount). Critics may some day, examining the gangster films of 1931, find them significant as perpetuations of a culture which the more self- conscious art-expressions of the day have rejected. For here, in realistic terms, brutalized in content and set going at a breathless pace, are stories and people that are Victor Hugo’s stepchildren, many of them highly likeable and articulated with fine ingenuity. In this picture, why does Sylvia Sidney tie her arm in a black sling when her father telephones her to meet him on the corner “if she has to break her arm to get there”? She could have hidden the pistol he handed her in her handbag, but instead she hid it in the sling—for romance, for Victor Hugo, immortal originator of gangster fiction. It seems right for her to wear the sling. It seems right that her father, Guy Kibbee, should be a genial, bald-headed Irishman, fond of rococo furniture, comic strips and a pet canary called Jackie. How much more fiendish—because more human—he seems when, going out for the evening’s beer-running and murdering, he says mournfully: “Jackie ain’t sung a tune all day!”

Other good details—Wynne Gibson shooting “The Big Feller,” gang boss, in the back, throwing in the pistol and locking the door of the room in which The Big Feller is alone with Miss Sidney; the derby hat of a murdered beer-runner, with his gilt initials prominent in the crown, floating down a city river; the closing episode in which the gangsters who were going to take Gary Cooper and Sylvia Sidney for a ride are themselves taken for a ride. The story is made valid by such details and is no less properly in the Hugo tradition if several of its episodes are entirely incredible, the plot tenuous. When the action makes orderly headway it is concerned with the difficulties that oppose the happiness of Miss Sidney and Gary Cooper, who works in a shooting gallery but later becomes a beer runner. Typical shot: Guy Kibbee murdering a friend while he shakes hands with him.

The term film noir was first coined by French reviewer Nino Frank when the end of the wartime embargo brought five 1944 Hollywood films – The Woman in the Window, Laura, Phantom Lady, Double Indemnity, and Murder, My Sweet – to Paris in the same week in 1946.