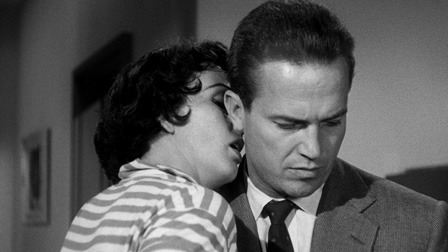 Criterion has announced the coming release of remastered prints of two major films noir on DVD and Blu-Ray: Kiss Me Deadly (1955) and Le cercle rouge (France 1970).

Kiss Me Deadly (1955) This cult classic from Robert Aldrich is a noir masterpiece and an essential relic of cold war paranoia.  Totally weird and compelling.  The release is scheduled for June 21. Pre-order.

Le cercle rouge (France 1970) From the master of dark urban cool Jean-Pierre Melville.  Alain Delon plays a master thief, fresh out of prison, who crosses paths with a notorious escapee (Gian Maria Volonté) and an alcoholic ex-cop (Yves Montand).  The release is scheduled for April 12. Pre-order.