A neat little noir from director John Berry, who also had a hand in the script by Allen Rivkin, which was adapted from a story by John Klorer.  Cheap blonde Claire (Audrey Totter) leaves meek and earnest hubby Warren (Richard Basehart) for a Malibu-type with dough.  The boyfriend ends up on ice, with hubby framed for the murder. Sardonic hulk and investigating cop Lt. Bonnabel (Barry Sullivan) plays with Claire to fish out the killer.  There is nice support from William Conrad as Sullivan’s buddy, and Cyd Charisse as a very good girl.

You just have to relish Totter – she is the devil in no disguise.  In an early scene Claire is having a piece of strawberry pie with cream at the counter of a drug store and is eyeing an advert for a mink in a magazine – hubby the night druggist at the other end of the store is slaving over mortar & pestle to keep her in a style of life she doesn’t desire – when she is picked up.  Even a b-girl would have held out a bit – the exchange is pure sleaze:

On her.
It’d look better on you.
Think so, huh?
Yeah.
Thanks, that’s nice.
And I got something nice to talk about.
So?
Yeah. Wanna hear more?
Where you parked?
Around the corner. Gray sedan.

In Silver & Ward’s ‘Film Noir: An Encyclopedic Reference’ (1992), Claire is described as a “classic femme fatale, a woman who drives men to the brink of disaster merely on a whim”.  I dispute the contention that Claire is a femme-fatale.  Sure she is mean and manipulative, and uses sex to get what she wants – “Hey, what’s better than money?” – but she does not use men as surrogates.  She is quite capable of doing whatever needs to be done to achieve her sordid ends on her own.  This said, there is a simply brilliant scene the next morning after Claire’s escapade with the gray sedan, that portrays a reversal of sex roles so potent it has to rank as one of the best expositions in noir of the femme-noir as ball-breaker.

Hubby returns to their apartment in the morning after ending his night shift.  Anxiously hoping against hope he finds Claire asleep in the marital bed – and is fooled into thinking she has spent an innocent night at home.  His mood lifts and he makes her breakfast – the toast is burnt – and tells her he has a surprise.  The next scene cuts to the couple in their car – Warren is driving – as it pulls up to a new bungalow in a raw housing estate [my reconstruction]:

Claire (annoyed): What are you stopping here for?

Claire (combing her hair and staring into the mirror of her compact): Are you kidding?

Warren (abashed but still in good humor): Gee, it would be wonderful to live out here, darling. Fresh air, room to entertain. It’s great for kids.

Claire (petulant): You wanna know something? I think it’s a miserable spot. It’s 30 minutes from nowhere.

Warren (exasperated): I thought this was what you wanted. What do you think I took the night shift for?  Saving and doing without so we’d have enough money to do this.

Claire: We still don’t have enough.

Warren: The FHA even approved the loan.

Warren gets out of the car and walks toward the house singing its praises… “Darling, at least look at it”.  Meanwhile Claire shifts into the driver’s seat, she is wearing a plain dark top and flannel pants.  She starts sounding the car horn loudly, closes the driver’s door, and starts the engine: “You comin?”.

Warren turns back mortified, while Claire revs the engine like a young punk, the exhaust fumes confronting Warren as he walks behind the car before getting into the passenger’s seat. 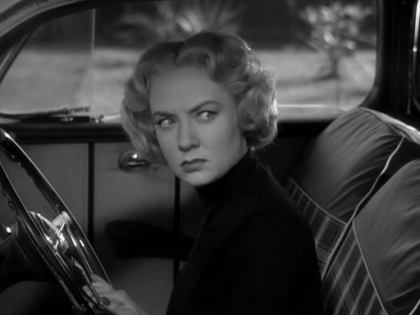