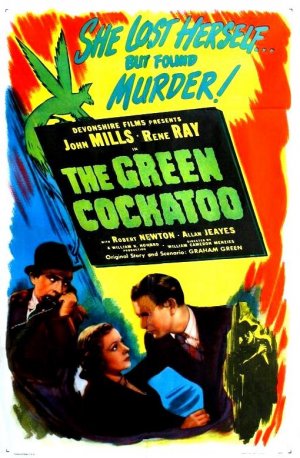 Graham Greene, who wrote the source novel and worked on the screenplay of perhaps the greatest British noir, Brighton Rock (1947), scripted the British hard-boiled crime thriller The Green Cockatoo (aka ‘Four Dark Hours’ or ‘Race Gang’).  After the movie was screened at the 43rd New York Film Festival in September 2005, Keith Uhlich of Slant, wrote: “Director William Cameron Menzies, an award-winning production designer, grounds The Green Cockatoo in expressionist shadows that anticipate Carol Reed’s The Third Man (the ne plus ultra of Greene’s cinema output) and the writer himself is evident via the piece’s sense of a veiled, yet inescapable moral outcome with which each character must deal.” Hal Erickson in the All Movie Guide says of the film: “Filmed in 1937, the British Four Dark Hours wasn’t generally released until 1940, and then only after several minutes’ running time had been shaved off. The existing 65-minute version stars John Mills, uncharacteristically cast as a Soho song and dance man. When Mills’ racketeer brother Robert Newton is murdered, Mills takes it upon himself to track down and punish the killers. Rene Ray, the girl who was with Newton when he died, helps Mills in his vengeful task”. Bosley Crowther in the NY Times in 1947: “With all its disintegration, though, [The Green Cockatoo] is still better melodramatic fare than is usually dished out to the patient Rialto audiences… An unknown here, Rene Ray, is very attractive as a wide-eyed country girl unwittingly involved in the Soho proceedings”. Film writer for The Guardian, Andrew Pulver, wrote in 2008 that the movie “has a similar [to film noir] commitment to the boiled-down essentials of the crime genre”.  Max Green, who later lensed Night and the City (1950) for Jules Dassin, is DP and the film’s score was one of the first from Miklós Rózsa. 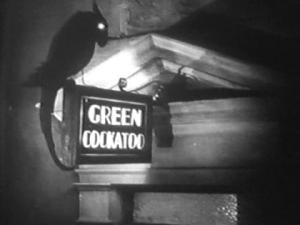 I found The Green Cockatoo an entertaining ‘curio’ (to paraphrase Pulver).  While there are elements that point to noir, the picture is more a melodramatic thriller.  A Soho seediness to the affair is enhanced by the very cheapness of the production.  Most of the action plays out during a London night after a young provincial ingenue arrives on a midnight train from the sticks and has a chance encounter.  The darkened sets have a definite moodiness.  A night scene introducing the Soho night-club, ‘The Green Cockatoo’, around which the action pivots,  has an accomplished mis-en-scene.  We see a couple stroll past a copper on the beat who walks up to a b-girl holding up a lamp-post in front of the club – the bobby stares the girl down and she moves on.

There is a lot of action packed into just over an hour, but the plot relies on  a touch too many contrivances and misunderstandings.  There is a nice chemistry between Mills and Ray, who is quite beguiling, with some nice patter and cute innuendo.  A number of scenes are played for laughs, which adds a pastiche quality.  Indeed, scenes at a plush hideout with a butler, played beautifully by Frank Atkinson, are laugh-out-loud funny.  This said, the pastiche factor detracts overall, and it is jarring to hear English characters using very unlikely expressions such as ‘guys’ and ‘dames’.  Though the Hollywood influence is obvious, there are no guns, only flick-knives.

Max Green’s lensing is most deserving of praise, and these shots from the picture attest to its expressionist elements: 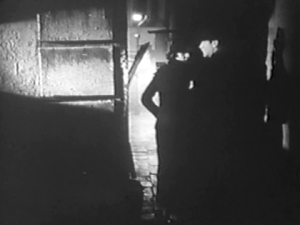 An interesting historical artifact, and worth seeking out.  Not on DVD.