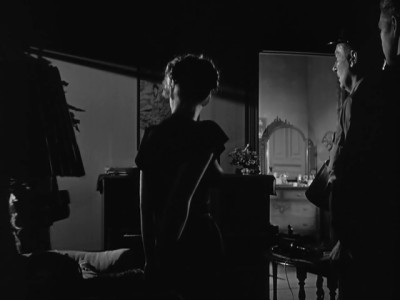 An Adrian Scott production for RKO, Deadline at Dawn (1946) is a  great ‘screwball’ noir that is a must-see.  A young Susan Hayward is as cute as a button in the lead role of a taxi-dancer who falls for a sailor mixed up in the murder of a b-girl.  The screenplay by Clifford Odets is based on a Cornell Woolrich story, and is as dark as any noir and as left as a Hollywood movie could go at the time.  At the end, a guy who has murdered a female blackmailer and general no-good dame, as the cops lead him away, laments “Imagine, at my age, to have to learn to play a harp”.  Think about it. Subversive yes! It is the only feature directed by Broadway director Harold Clurman, who was moon-lighting in Hollywood at the time, after the break-up of the Group Theater in NY.  DP Nick Musuraca’s chiaroscuro lensing completes the picture.  As Trevor Johnston says in his review for the Time out Film Guide, “it’s made with cockeyed artistry from beginning to end, and shouldn’t be missed”.

The action takes place in a single night in New York, with a signature Woolrich race against time. Much of Odets’s dialog owes little to Woolrich and is an entertaining mash-up of clever puns that is in the tradition of the romantic screwball comedies of the period. A cavalcade of character actors portrays an ensemble of zany denizens of the New York night; taxi-dancers, b-girls, gangsters, blackmailers, besotted drunks, and cabbies.  But there is a serious underside: the greed, corruption, and passions of the noir city, where a murder seems the only way-out, and where trusting a stranger is seen as foolish even if the guy is in a jam.

There is a lot of left philosophising, as you would expect from an activist team of film-makers.  Academic’s have taken issue with this alleged hijacking of Woolrich’s story.  Mayer and McDonnell in Encyclopedia of Film Noir (2007) complain that “Unfortunately, the  film’s script tries to inject overt social meaning, and Woolrich’s clever plot is pushed aside by Odets’s pretentious dialogue”, and Robert Porfiro in Silver’s and Ward’s Film Noir: A Encyclopedic Reference (1992) concludes “Odet’s patronizing concern for the common people, and even worse, his pseudo-poetic, elliptical dialogue are out of place in the lower-class locales  of the film”.

Porfirio’s political prejudices aside, these haughty criticisms of Odet’s dialog don’t align with my feelings. Odet’s dialog is clever and rings true for every character.  The sailor is a small-town boy with solid values and his simple home-spun philosophy of honesty and fairness is totally believable.  Hayward’s taxi-dancer is also from a small town and the necessary cynicism she has acquired in the dark city is genuine – a matter of survival – but she retains her formative values and acts on them despite her city ways.  She is attracted to the young ‘hick’ sailor because he unlike most guys in the big city does not have an angle: what you see is what you get.  Here Odet’s focus is the fundamental noir motif of city vs. country, corruption and immorality vs. sincerity and decency. 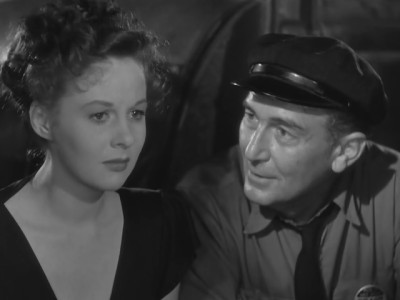 A taxi-driver who helps the couple, Gus Hoffman, is played with assurance by Paul Lukas. Gus, an immigrant with a strong accent, is the film’s philosopher and the target of Porfiro’s attack.  He is a man who has seen injustice and suffering, and his words are world-weary and wise.  Such men exist and I have known many: working people educated in the school of life.

You make your own judgment.  This is a conversation between Gus and the Susan Hayward character, June, before they are interrupted by a cop on the beat:

The storm clouds have passed us.
Over Jersey now.
Statistics tell us we’ll see the stars again.

Golly, the misery that walks around
in this pretty, quiet night.

June.
The logic you’re looking for…
…the logic is that there is no logic.
The horror and terror you feel, my dear,
comes from being alive.
Die and there is no trouble,
live and you struggle.
At your age, I think it’s beautiful
to struggle for the human possibilities…
…not to say I hate the sun
because it don’t light my cigarette.
You’re so young, June, you’re a baby.
Love’s waiting outside
any door you open.
Some people say,
“Love is a superstition.”
Dismiss those people,
those Miss Bartellis, from your mind.
They put poison-bottle labels
on the sweetest facts of life.
You are 23, June.
Believe in love and its possibilities
the way I do at 53.

He’s the only man in four years
in New York who hasn’t?