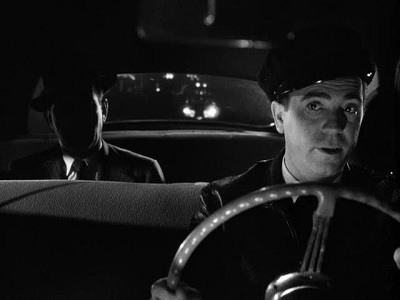 Dark Passage (1944) is one of the few Bogart pictures that disappoints.   Bogart goes through the motions of an escaped con on the run in Frisco trying to clear himself of a murder charge.  Bacall looks great, but for a thriller the whole affair is flat. While the screenplay by director Delmer Daves – from a story by David Goodis – relies on too many implausible coincidences, there is a particularly effective scene where Bogart hops a taxi late at night.

Bogart: Head down the hill. I’ll tell you where to go from there.

Thanks, and I don’t feel chatty.

You always that way?

Yeah, that’s why I don’t have many friends.

You know, it’s funny about friends.

Brother, you never drove a cab. You got no idea how lonely it gets.

What’s lonely about it? You see people.

Sure, you’re right there. You should see the character I had for a fare yesterday. Picked him up at the Ferry Building.Standing on the curb with a big goldfish bowl in his arm, full of water. Two goldfish. Climbs in the back of the cab, sits down and puts the goldfish bowl in his lap. Where do you think he wants to go? To the ocean. Clean from the Ferry Building to the Pacific Ocean. But he doesn’t know that there’s seven hills. Seven steep hills in between. So we start off. Up the first hill, slippity slop, down the hill, slippity slop. Water all over the back seat, the goldfish on the floor. He picks them up, puts them back in the bowl… up we go again, slippity slop, water all over the… You never saw such a wet guy in your life when we got to that ocean. And two tireder goldfish. But I like goldfish. I’m going to get a couple for the room. Dress it up a little bit, it adds class to the joint. Makes it a little homey.

I thought you said you got lonely.

That’s right. I pick people up and take them places, but they don’t talk to me. I see them get out and go in spots, have fun… then I pick up another load coming out… and I hear them telling about all the fun they had. But me, I sit up here all alone, and it gets lonely.

You said it. Where are we going?

If I tell you, you’ll ask me why I’m going there… and what am I going to do there, and am I gonna have fun.  A guy gets lonely driving a cab,remember?

Smart in what way?

About people. Looking at them. Faces.

It’s funny. From faces I can tell what people think, what they do… sometimes even who they are. You, for instance, you’re a guy with plenty of trouble.

I don’t have a trouble in the world.

Don’t tell me, buddy. I know. She gave you plenty of trouble, that dame. So you slugged her…  Not now, not here, too many cops around. Don’t try to hit me in the back of the head… or I’ll run this crate up into one of those hotel lobbies.

Don’t give me nothing. Where do you want to go?

You might as well make it the police station.

If it was easy for you to spot me, it would be easy for others.

That’s where you’re wrong.  Unless you’d be happier back in Quentin.

Sure, that’s why they sent us up there, to keep us happy.

I see what you mean. Let’s go up here and talk. Did you really bump your wife off?

I don’t figure it that way. I figure you slugged her with that ashtray because she made life miserable for you. I know how it is. I live with my sister and her husband. Now, they get along fine. So fine, that one day he threw a bread knife at her. She ducked. That’s the way it goes. Maybe if your wife had ducked… there’d be no trial, no Quentin, no on the lam.

She was all right.  Just hated my guts.  For a long time I tried to find out why, then I didn’t care anymore.

I know. Nice, happy, normal home. I almost got roped in a couple of times myself. If you find the right girl, it’s okay.

I wonder what he could do with your face?

A friend of mine. Knows his stuff.

How much would he want?

How much you got?

And keep after me from then on.

Nothing. I’ve seen him work.  He’s great.  I wouldn’t know my own mother after he got through with her.

How long would it take?

Maybe a week, if he doesn’t have to touch your nose.  I don’t think he will.  Just a little around the eyes and here and there.  Got a place to stay? We’re right near the place.

The only close friend I’ve ever had.

One thought on “More than the Director: The Noir Writer”