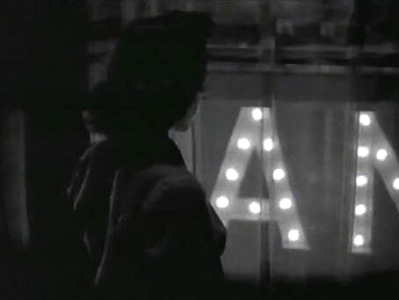 “as When Strangers Marry illustrates, it is precisely through the triggering of sensations that film noir speaks most eloquently. A mode of signification that privileges connotation over the denotative, cause-and-effect logic of linear narrative, the highly-wrought noir aesthetic ensures that the ‘meaning’ of the noir city is not to be found in the narrative’s surface details but in its shadows, in the intangibles of tone and mood.” – Frank Krutnik, ‘Something More Than Night’, The Cinematic City (ed David B. Clarke), p 98-99

When Strangers Marry, made by the King Brothers, an independent production team signed to Monogram, was shot in ten days for under $50,000 and marketed as a “nervous A”. But Monogram could not get a percentage deal and the movie opened as a b, doing good business and garnering critical praise. James Agee said of the movie: “I have seldom, for years now, seen one hour so energetically and sensibly used in a film. Bits of it, indeed, gave me a heart-lifted sense of delight in real performance and perception and ambition which I have rarely known in any film context since my own mind, and that of moving-picture making, were both suffi­ciently young”.

2 thoughts on “The Cinematic City: “the meaning is in the shadows””