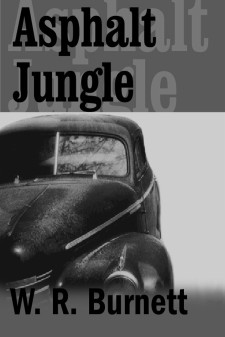 From W.R. Burnett’s novel  The Asphalt Jungle (1949).  Notice how often the adjective ‘black’ is used.

Dix made no comment and sat looking off across the wide black river,
which moved sluggishly southward between its steep cement
embankments toward its faraway union with the Mississippi.
There was no moon, but the sky was cloudless and a handful of bright
stars, diamond points of bluish light, glittered coldly over the tall
buildings on the far shore. The houses along the embankment were
almost all dark, but here and there a window showed light and cast
golden zigzag reflections onto the shiny black pavement of the river. A
slow, damp wind was blowing, carrying a smell of deep water.
Late as it was, traffic was fairly heavy on the big, three-lane bridge.
Suddenly a siren wail rose from the darkness of the far shore, and in a
moment a prowl car passed them, going back at high speed toward
the hilly slums of the Camden Square district.

A dark, blustery night had settled down like a cowl over the huge,
sprawling Midwestern city by the river. A mist-like rain blew between
the tall buildings at intervals, wetting the streets and pavements and
turning them into black, fun-house mirrors that reflected in grotesque
distortions the street lights and neon signs.

The big downtown bridges arched off across the wide, black river into
the void, the far shore blotted out by the misty rain; and gusts of wind,
carrying stray newspapers, blew up the almost deserted boulevards,
whistling faintly along the building fronts and moaning at the
intersections. Empty surface cars, and buses with misted windows,
trundled slowly through the downtown section. Except for taxis and
prowl cars, there was no traffic.

River Boulevard, wide as a plaza and with its parkways and arched,
orange street lights stretching off into the misty horizon in diminishing
perspective, was as deserted as if a plague had swept the streets
clean. The traffic lights changed with automatic precision, but there
were no cars to heed or disobey them. Far down the boulevard, in the
supper-club section of the city, elaborately glittering neon signs
flashed off and on to emptiness. The night city, like a wound-up toy,
went about its business with mechanical efficiency, regardless of man.

Dix sat up with a start and looked about him as if he’d never seen this
place before—never heard of it even. He had an uneasy feeling that he had
been lifted up in the night by unknown hands and carried to
this place of exile, this alien city with its canyons of masonry and its
unpredictable and ugly ways—far from home, far from sense and
meaning, far from any resting place.

They were living very close to the river now, and all night long they
could hear the tugs moaning as they slid downstream pulling the
big coal barges; and sometimes, when it was exceptionally quiet,
they could hear the waves, stirred by the passage of the heavyladen
barges, washing and slapping against the old wharves at the
foot of Front Street. Through their one window they could see the
Lackawanna Street Bridge arching off toward the tall buildings of
the downtown area across the river. In the daytime the bridge was
huge, gray, and misty-looking; at night it was nothing but a long,
brilliant garland of yellow lights, duplicated upside down in the
black water.

They cleared the suburb at last, and huge factories and warehouses
began to loom along their route. A light mist started to fall, making little
pinkish haloes about the street lights. For a while they skirted a
railroad embankment, and a freight train passed them going toward
town, and they heard the lonely, off-key ringing of the crossing-bells.
At last they pulled clear of the giant warehouses, the factories, the big
viaducts arching up out of the mists to nowhere, and came out into a
wide, flat, sparsely settled area, with a few poor, frame houses
grouped along cracked and weed-bordered sidewalks.

The mist turned to a drizzle, and the wet asphalt shone like black
glass, palely reflecting the widely separated street lights. A cold
wind began to blow, and Riemenschneider huddled down into his
big overcoat.