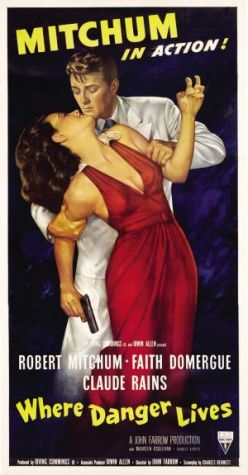 A naive young doctor falls for a stunningly beautiful but unstable young woman, and ends up the target at a shoot-out on the Mexican border after a frantic road trip to escape a murder rap. Robert Mitchum is the doctor and little-known b-actress Faith Domergue is the dame. Domergue steals the picture from Mitchum.  Her nuanced performance as a ravishingly sublime femme-fatale is enthralling and she dominates every scene. There are many close-ups of her manic eyes full of menacing allure.  If she is crazy, she is the sanest psychopath to inhabit a film noir. Her guile and determination are almost heroic.

Low angle available-light interior shots exposing ceilings early on are deftly used to frame scenes of tension and violence.The noir motif of entrapment is strongly focused by close-framed shots, particularly on the road, where the fleeing protagonists are shown within the car or from outside the car in close-up, and rarely in open spaces.  The climactic finale on a neon-lit street in a border own at night is beautifully lit and the action superbly edited. If not for Domergue’s manic turn and Musuraca’s camera, Farrow’s less than taught direction would have doomed the picture to mediocrity. The establishing scenes drag, and the middle section with Mitchum and Domergue on the lam is slow, with two aimless interludes: when they have a car accident, and in a small town where they are forced to ‘wed’.  There is an unnecessary and soppy final scene that undermines the riveting penultimate scene where the camera stares up at Mitchum’s tortured face against an industrial wire fence as the cops surround the fugitives after the shoot-out.

A uneven film made memorable by Domergue’s portrayal and the stunning climax.