An escaped leopard is linked with the grisly murders of three young women in a small New Mexico town. (1943 RKO. Directed by Jacques Tourneur 96 mins)

A low-budget thriller from Val Lewton’s horror production unit at RKO based on a Cornell Woolrich novel, The Leopard Man, despite a strong film-making team and spooky noir lighting, looks dated and apart from the famous expressionist sequence, where a young latino girl is sent out into a dark night with a leopard on the loose, to buy corn-meal for her mother, is visually flat. But even the scenes with the terrified young girl are inferior to a similar sequence in Tourneur’s earlier and far superior Cat People (1942) from the same production unit. 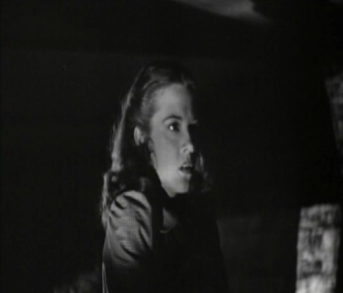 The Leopard Man lacks tension and the drama is muddied by a soppy romantic angle, and any viewer who is half-awake will pick the culprit very early on.

Overall, The Leopard Man is disappointing and over-rated.

This is some background and an alternate take from Mayer and McDonnell, ‘Encylcopedia of Film Noir’:

RKO bought the rights to Woolrich’s next novel, Black Alibi (1942), for $5,175 and gave it to producer Val Lewton, who had just completed two memorable low-budget horror films, Cat People (1942) and I Walked with a Zombie (1943). Lewton, working with screenwriter Ardel Wray, proceeded to change the setting of Woolrich’s novel from Latin America to New Mexico. They also altered the story line and the title of Woolrich’s book was changed to The Leopard Man (1943). Woolrich’s five sequences involving different women who are stalked by a killer jaguar and, subsequently, a man, were changed to two deaths, with only the first one caused by a black leopard, instead of a jaguar. However, the first killing, a young girl sent by her mother into the night to buy bread for the family, remains one of the most frightening moments in the cinema as Tourneur blends silence, natural sounds, and stylized lighting with images that capture the terror of the young girl as she moves through the darkness toward her house, only to discover that her mother has locked the door. Her death is presented mainly by the use of sound and lighting.