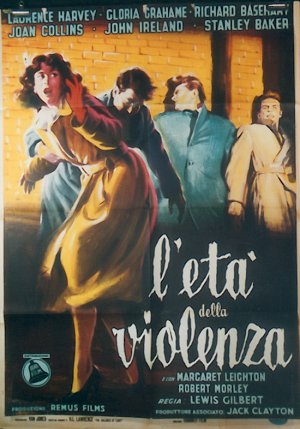 The Good Die Young  is an interesting British noir that employs the unusual homme-noir motif and the more common disillusioned war veteran theme in an original treatment. 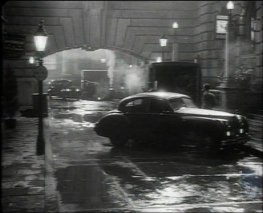 While an uneven film, the actual heist and denouement are very strong with deep focus location night-for-night shooting on dark sombre London streets, the London underground, a symbolic sequence in a grave-yard, and expressive tilted framings that break the linearity of the narrative.  The opening scene, which regrettably is obscured by the credits, coupled with a dramatic musical score, is evocative of US noirs of the period with the heist car speeding towards the camera on a rainy London night .

The strongest of the four stories are that of a washed-up boxer played beautifully by English actor Stanley Baker and that of the wastrel played with suave menace by a young Laurence Harvey.  The other two men are Americans whose stories are less convincing, and Gloria Grahame as the cheating starlet-wife of one of them is wasted in a tacky role.  The ‘seduction’ scene where the toff connives to get the others into the caper is marred by redundant and silent-era close-ups of Harvey’s exaggerated facial expressions and arch eye movements.

Interesting historically, and it is worth wading through the first 80 minutes to get to the final action-packed 20 minutes.