I greatly admire Lewis’s film noir The Big Combo (1955), but Gun Crazy is a lesser work.  I am not sure it is even a film noir.

While there is a potent mix of sex and violence, layered with psycho-sexual motifs and fetishes, the narrative lacks tension and some scenes are very slow. Peggy Cummins is strong as the psychopathic urban gun-slinger, Laurie, but there is no depth or history to this woman who kills on reflex and with no remorse. The rest of the cast is ok only, and it is the director’s signature obsession with violence as a sexual psychosis that drives the story.  Gun Crazy is really a robbers-on-the run movie with noir pretensions, and these are only really evident in the climactic early morning shoot-out at the end in a fog-laden creek.  Bart, Cummins’ partner in crime, achieves some sort of redemption by shooting Laurie dead before she can kill two of his un-armed child-hood friends, one a deputy sheriff, who approach them  pleading that they give themselves up, after which he is killed in a hail of police bullets.  There is a tragic irony here: the man who is not a killer kills his reason for being.

The much-acclaimed long take inside the get-away car before, during, and after a bank robbery, is innovative for the period, but the action is flat until after the heist and they are pursued by the cops.  Low and high camera angles are used by Lewis to express mood and suggest sexual undercurrents, but if they operate on the audience, do so only unconsciously. While much has also been made of the ‘amour fou’ of the two protagonists, it is more an instinctual sexual attraction that is sustained on Laurie’s part by the sexual gratification that she achieves in their life crime.

Interesting historically and although it transcends its b origins, Gun Crazy is not a great movie. It’s cult status has more to do with the perversity of the theme and the performance of Cummins, than its merits as a filmic work. 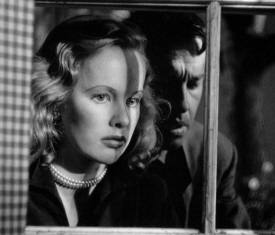