Comedy melodrama. Army officer (Robert Mitchum) is framed for a robbery and sets off after the culprit in a wild car chase across Mexico with a swell girl (Jane Greer). A hoot! Directed by Don Seigel and written by Gerald Drayson Adams and Geoffrey Homes from a story by Richard Wormser.

Last year in an insightful post on Mexico and Film Noir on his mardecortesbaja.com blog, Lloydville said: “Greer and Mitchum in Out Of the Past have their romantic idyll in Mexico but can’t bring the magic of it back with them to the States.  This fits in with the notion of Mexico as a lost or unattainable paradise.  But sometimes the idea of Mexico went to filmmakers’ heads – they got giddy with the possibilities of it.  Films that started out noir would, once they crossed south of border, turn into larks, light-hearted and feckless. Re-teamed in The Big Steal, Greer and Mitchum venture into Mexico to try to extricate themselves from typical noir predicaments involving betrayal and unjust accusation, but the dark clouds vanish almost immediately – they find love and high-spirited adventure instead of noir’s dark, impenetrable maze, and all ends well.  Film noir expert Elizabeth Ward amusingly suggests that The Big Steal ought to be labelled fiesta noir…”

The Big Steal is a fun ride with a nice twist at the end that leaves you wanting more. Mitchum and Greer are magic together.  There are really funny running gags with Greer delivering great lines with wit and charm: any guy with blood in his veins will fall for her in this picture. 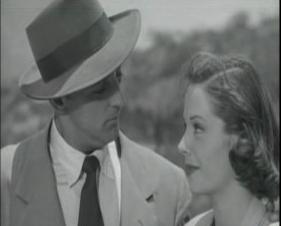 The supporting cast is strong, with a great turn by the veteran Mexican-born  actor Ramon Novarro as a wiley Mexican police inspector, who has some magic lines. The scene where Greer fabricates an elopement story for the soft-hearted foreman of a road-gang is high farce infused with a true empathy and affection for the romance of Mexico and her people. This affection permeates the whole film with a sense of true liberation.  The bouncy Mexican musical soundtrack echoes this mood of fun and adventure.

Two of my favorite songs reflect this love of Mexico: Elvis singing Mexico (Tepper,Bennett) in his 1963 movie Fun In Acapulco, and James Taylor’s Mexico. Elvis sings Mexico with such joy that for as long as the song lasts his voice takes you there:

You never order, water
When you order south of the border
…In to kiss a lovely senorita
You do the samba, la bamba
…I’ll go where you go
Life begins when you’re in Mexico

James Taylor’s Mexico is more plaintive and shares a longing for some mythical place:

Way down here you need a reason to move
Feel a fool running your stateside games
Lose your load, leave your mind behind, Baby James

Oh, Mexico
It sounds so simple I just got to go
The sun’s so hot I forgot to go home
Guess I’ll have to go now

Oh, Mexico
It sounds so sweet with the sun sinking low
Moon’s so bright like to light up the night
Make everything all right

Baby’s hungry and the money’s all gone
The folks back home don’t want to talk on the phone
She gets a long letter, sends back a postcard; times are hard

Oh, down in Mexico
I never really been so I don’t really know
Oh, Mexico
I guess I’ll have to go

Oh, Mexico
I never really been but I’d sure like to go
Oh, Mexico
I guess I’ll have to go now

This love for Mexico is expressed more deeply and poetically in Jack Kerouac’s On the Road:

I was alone in my eternity at the wheel, and the road ran straight as an arrow. Not like driving across Carolina, or Texas, or Arizona, or Illinois; but like driving across the world and into the places where we would finally learn ourselves among the Fellaheen Indians of the world, the essential strain of the basic primitive, wailing humanity that stretches in a belt around the equatorial belly of the world from Malaya…to Morocco to the selfsame deserts and jungles of Mexico.