After 70 years, Fury, which was co-written by Lang, remains a powerful and still relevant social criticism that telegraphs the recurring theme in Lang’s later Hollywood noirs: the fate of the individual when social institutions fail and injustice destroys innocent lives.

The film’s title is particularly apt with the first half concerned with mob fury, and the second half with the fury of the erstwhile victim seeking revenge. Strong performances from Tracy and Sylvia Sidney hold the narrative together even though their actual screen time is limited. The focus is on how hysteria grips a small town and allows mob rule to destroy social cohesion, and in the aftermath how the operation of the laws that protect freedom are thwarted by community loyalties trying to shield the law-breakers from justice. The irony is profound and convincingly played out in a court-room in the trial of the ringleaders. Lang spares no-one from the forensic gaze of the camera. A camera within a camera is used to indict the defendants when a projector is set-up in the court-room, and newsreel footage of the affray is shown. The newsreel footage is silent, and plays like a silent movie with riotous acts and facial expressions exaggerated for dramatic effect. A modern audience may find this technique dated, but it would have certainly had a strong impact on contemporary movie-goers only a few years after the end of the silent era.

Lang cut his teeth in German silent cinema, and silent movie techniques are also used in the movie’s action. Dramatic sustained close-ups of characters with extremely emotional expressions, and montage in two scenes: in the opening sequence a cut to an ominous roaring steam train disturbs the evening stroll of the two lovers, and later a clucking hen-house cut is a sardonic chorus to the burgeoning female rumor mill that is the build-up to the riot.

While Alain Silver and Elizabeth Ward include Fury, in their book, Film Noir: An Encyclopedic Reference to the American Style, I see the movie as pre-cursor only – not a fully-fledged film noir. The resolution at the end of the film is classic Hollywood, with the lovers re-united and justice morally if not legally served, but the Tracy character remains profoundly marked by his experience and not fully repentant of his attempt at vengeance. This is the territory that film noir would begin to explore a few years later. 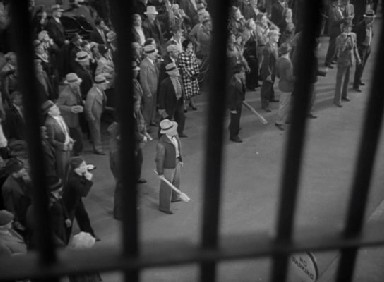