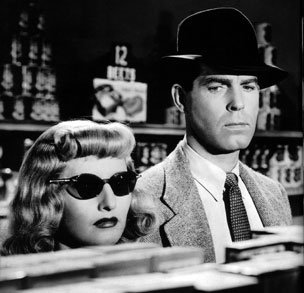 Now that I have your attention.

I have just been googling with Google Scholar, and have been amazed at the wealth of film noir material this Beta service unearths. There are book extracts, complete books, and journal articles on many and varied aspects of the genre.

This brings me to the heading for this post. A very interesting article I uncovered comes from the Journal of Criminal Justice and Popular Culture: Personality Disorder And The Film Noir Femme Fatale by Scott Snyder of the University of Georgia:

Motion pictures can influence the development of both normal and disordered personality. The femme fatale of the film noir movies of the 1940s and 1950s is representative of several related personality disorders characterized by histrionics, self-absorption, psychopathy, and unpredictability. This report will examine how various societal factors occurring during World War II and its aftermath influenced the portrayal of these disordered females and how these depictions, in turn, reflected and influenced American culture at the time. Specific reference to issues of criminology, economics, gender, as well as feminist viewpoints on this phenomenon will be explored.

One thought on “Are Femme-Fatales Crazy?”