This bizarre and hysterical silent film, an early entry in the horror genre from director, Robert Weine, is seen by many as the genesis of expressionist cinema, which flourished in Germany in the 1920’s, and in turn influenced the stark lighting associated with Hollywood film noir. Fritz Lang had some early involvement with the film, but this was in the planning stages. 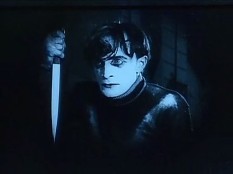 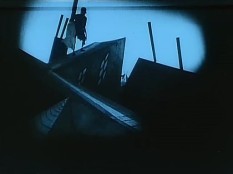 But I support the heretical view that the expressionist connection is tenuous. The sets are staged distortions with shadows painted on, and the action filmed using flat internal lighting and a static camera center-stage. The film has little if any relevance to film noir in theme or filmic technique, apart from the use of flashback within a flashback.